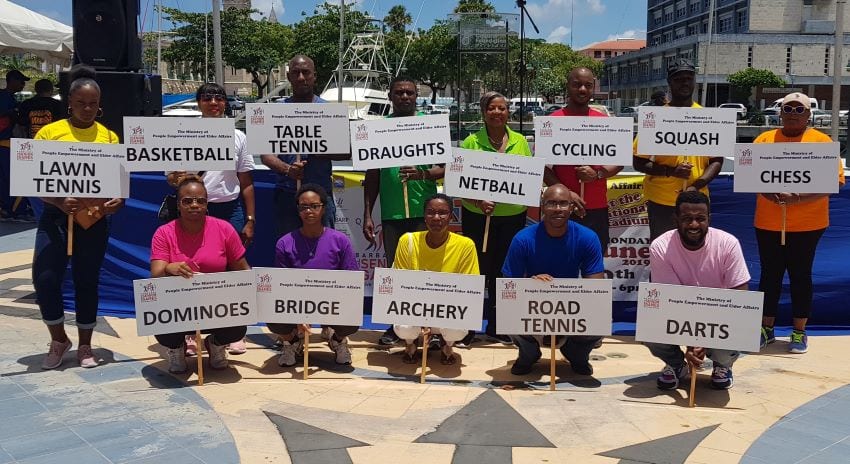 Minister of People Empowerment and Elder Affairs, Cynthia Forde, intends to lead by example by participating in the finale of this year’s National Senior Games – the track and field competition – slated for the National Stadium on Whit Monday, June 10.

Minister Forde expects to be joined on the track for a celebrity race by a number of her Cabinet colleagues, including Minister with responsibility for Sports, John King; Minister of Energy and Water Resources, Wilfred Abrahams; Minister of Maritime Affairs and the Blue Economy, Kirk Humphrey; and Minister in the Ministry of Economic Affairs and Investment, Marsha Caddle.

Speaking during a ceremony to officially launch the games in Independence Square last Saturday, the Minister with responsibility for Elder Affairs encouraged seniors to sign up for the games, noting: “You do not have to be a professional athlete to be a part of what we are doing here. I’m not a professional athlete; all it calls for is to make up your mind and to become intimately involved.”

Predicting that this year’s games will be the best ever, she reminded seniors that there was a range of activities to choose from, and encouraged them to peruse the calendar to see which sports piqued their interest.

Stressing the importance of exercise and proper diet to good mental and physical health, Minister Forde lamented: “There are too many thousands of our citizens who are living longer, but they are generally plagued with numerous ailments, diseases and challenges, which impact on the quality of life.”

She advised that participating in the games was one way of combatting this challenge. “I want to remind you that the Senior Games and other engagements in exercising the mind and the body will help to turn around the ugly scourge of diabetes, stroke, heart disease, dementia and other things.”

In an appeal to both participants and supporters to come out in their numbers to this year’s games, Minister Forde stated: “I implore all of you here today to get on board as we show the rest of Barbados, the region and the world that our seniors are ready, willing and able to set the trend that age is nothing but a number.”

The opening ceremony was preceded by a parade of teams from Jubilee Gardens to Independence Square.