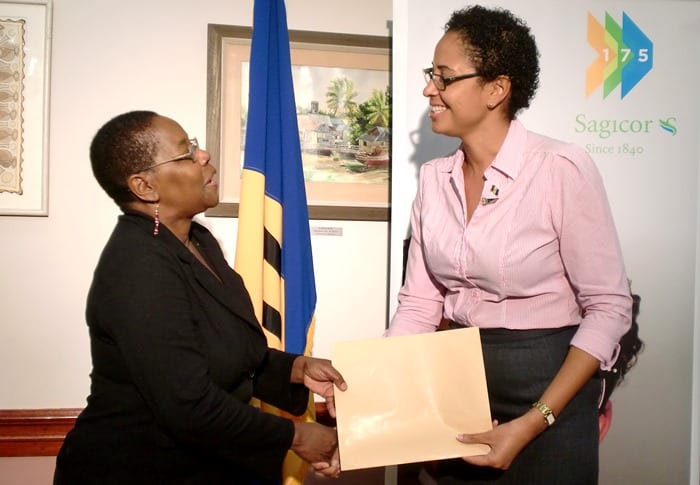 The Community Independence Celebrations Secretariat today received a $25,000 boost for its annual Lighting Ceremony, which will be held on Tuesday, November 1, in National Heroes Square, The City, at 5:30 p.m.

Permanent Secretary in the Ministry of Culture, Ruth Blackman, accepted the cheque on behalf of the secretariat from Marketing Officer of Sagicor Life Inc., Folayan Taitt, during a handover ceremony at the Ministry’s headquarters in Sky Mall, Haggatt Hall, St. Michael.

Mrs. Blackman thanked Sagicor Life Inc. for its continued support throughout the years, and pointed out that the organisation has supported the lighting ceremony for over 20 years. “There aren’t too many companies that can boast of being such loyal supporters,” she stated.

Highlighting some of the events slated to take place throughout November to mark Barbados’ 50th anniversary of Independence, the Permanent Secretary noted that this year was “very special”, as all roundabouts and one building in each Parish will carry special lighting.

She also disclosed that persons who share the November 30, 1966, date of birth would be given the opportunity to flip the switch to illuminate the city and selected areas.

To download the full schedule of parish activities for the month of November, persons may click [media-downloader media_id=”22362″ texts=”here”].