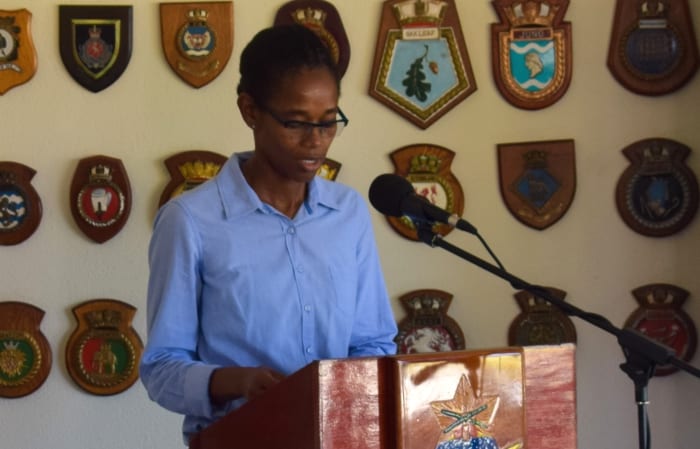 The Barbados Defence Force (BDF) is on a mission to raise $25,000 in this year’s Digicel & BDF Have A Heart Charity Walk and Run on Saturday, August 11.

Coordinator of Social Services and Chairperson of the BDF’s Morale Welfare and Recreational Committee, Harriet Clarke, made this disclosure today as she addressed the Sponsors’ Breakfast and official launch of the Walk and Run Boot Camp Series 2018, at St. Ann’s Fort, the Garrison, St. Michael.

Acknowledging that the $25,000 target was ambitious, Ms. Clarke stressed, however, that it was achievable. In urging the potential sponsors to partner with the BDF, she said: “Your support of this event would allow the BDF to assist the Precious Touch Foundation Inc. to increase the wishes it grants to children and enrich the lived experience of those wish children and their families impacted by chronic and terminal illnesses.”

Ms. Clarke pointed out that after expenses from the Digicel/BDF Have A Heart Charity Walk & Run, all the proceeds were transferred to Precious Touch. She disclosed that in 2016, the sum of $10,000 was handed over and in 2017, the amount raised was $13,764.10.

Vice President of Precious Touch Foundation Inc., St. Auban Callender, said 68 wishes of children who had been diagnosed with life-threatening medical conditions had already been granted since the organisation’s inception in November 2007.

Mr. Callender disclosed that six more children would be granted wishes, including one this weekend, and four who would be travelling overseas later this year. He stated that the children, who must be between the ages of two and 16, did not have to be terminally ill to qualify for a wish.

He thanked the BDF and the organisations that had supported Precious Touch over the years, saying the lives of those children had been brightened.

Chief of Staff, Colonel Glyne Grannum, said the BDF was very proud to be a part of the charity walk and run and encouraged potential sponsors to get on board so more children could be given assistance.

In preparation for the walk and run and to encourage physical fitness and healthy lifestyles, five six-week series of boot camp exercise sessions will be held from Monday, April 16 to Friday, November 9. They will be delivered by trained BDF physical training instructors.