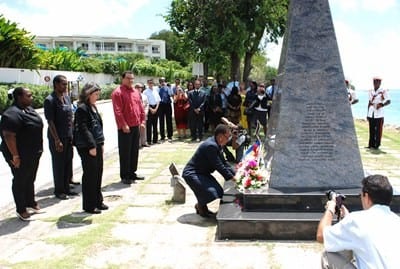 Barbados will join with the Embassy of the Republic of Cuba in commemorating the 40th anniversary of the Cubana Air disaster of 1976.

Together, they will hold a ceremony at the site of the monument constructed in remembrance of the tragedy, at Paynes Bay, St. James, next Thursday, October 6, at 10:00 a.m.

Acting Minister of Foreign Affairs and Foreign Trade, Steve Blackett, and Ambassador of the Republic of Cuba to Barbados, Francisco Pena, are expected to address the gathering, which will include American actor, Danny Glover, and two special guests from Cuba – Fernando Gonzales and Camillo Rojo.

Meanwhile, a number of organisations, working in tandem with the Cuban Embassy, will also stage a series of activities to mark the occasion from October 2 to 8.

The entities include the Clement Payne Movement, the Pan-African Coalition of Organisations, the Cuban Barbados Friendship Association, the International Network in Defense of Humanity, and the Embassy of the Bolivarian Republic of Venezuela.

Themed: The Journey from Terror to Love and Life, some of the activities include a Cubana photo and book exhibition on Tuesday, October 4, at the Clement Payne Centre, Crumpton Street, St. Michael, from 11:00 a.m.; and a Cuban Film Night at the Walcott Warner Theatre at the University of the West Indies Cave Hill Campus that same evening at 6:00 p.m. Actor Danny Glover will be present.