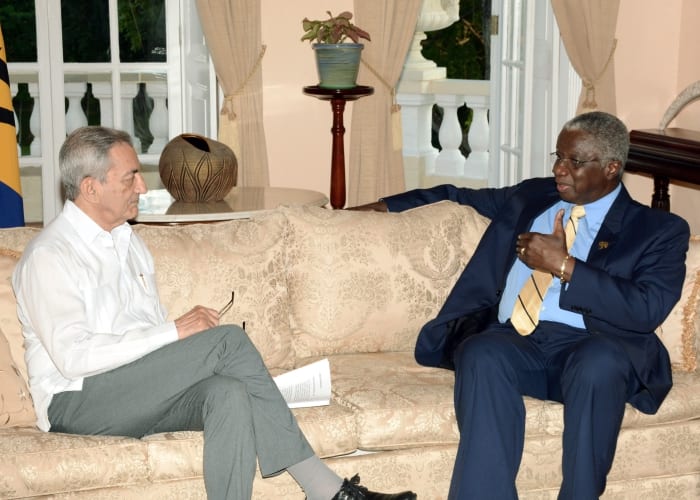 Prime Minister Freundel Stuart, in discussion with Member of the Secretariat of the Communist Party of Cuba and Head of the Department of International Relations of its Central Committee, Dr. Jose Ramon Belaguer Cabrera, during a recent courtesy call at Ilaro Court. (A. Gaskin/BGIS)

Barbados has assured Cuba of its support, as that country continues to protest against the economic blockade imposed by the United States.

The assurance came from Prime Minister Freundel Stuart, as he received Member of the Secretariat of the Communist Party of Cuba and Head of the Department of International Relations of its Central Committee, Dr. Jose Ramon Belaguer Cabrera, during a courtesy call at Ilaro Court, recently.

Mr. Stuart noted that the decision by Barbados, Guyana, Jamaica and Trinidad and Tobago to establish diplomatic relations with Cuba at the height of the Cold War required courage.

“We have never regretted that decision, and every year we have gone to the United Nations and called for the removal of the blockade against Cuba because we believe that the continuing blockade is an act of injustice against your country. You can expect our advocacy of that cause to continue until the blockade is removed,” the Prime Minister said.

He also confirmed to the Cuban official that Barbados will be represented at the Cuba/CARICOM Summit, scheduled for December 8 in Antigua.

Dr. Cabrera told Prime Minister Stuart that Cuba was very grateful for Barbados’ vote against the blockade at the UN Assembly. He maintained that the blockade constituted an obstacle to the economic development of Cuba, and was a violation of the human rights of the Cuban people.

He said that the decision by Barbados, Guyana, Trinidad and Tobago and Jamaica to establish diplomatic relations with his country 45 years ago represented “a defiance of the isolationist policy of the United States to our country”.

The Cuban official said he looked forward to welcoming Barbados to the upcoming Cuba/CARICOM Summit.