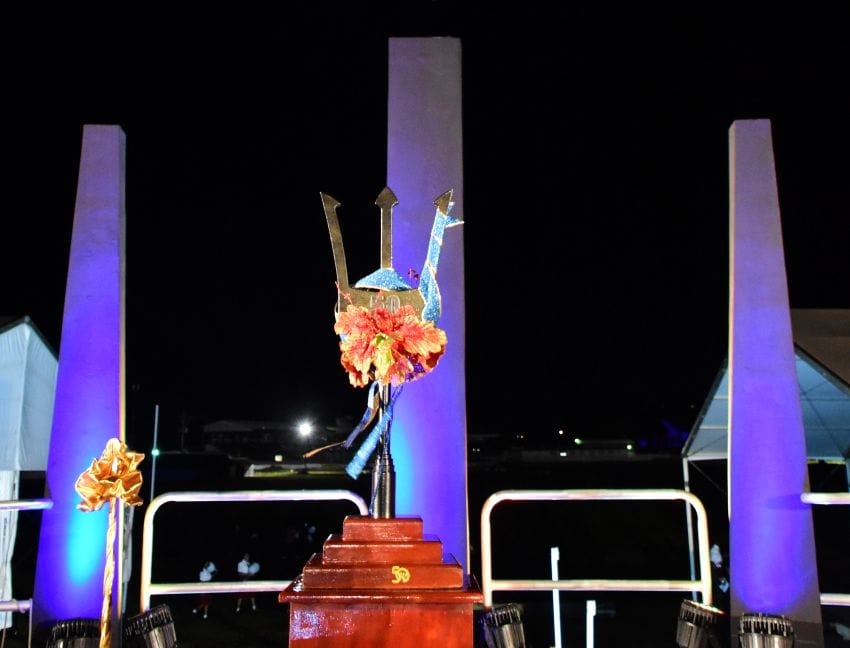 Barbados was swept by patriotic fervour last night when hundreds of excited Barbadians converged at the Garrison Savannah for the Reveal of the 50th Anniversary of Independence National Monument.

Although the revealing had been delayed by 24 hours because of the inclement weather, it did not stop Barbadians and visitors, young and old, from being a part of the historic moment.

During the near one-hour ceremony, Sir Garfield Sobers, Firhaana Bulbulia and Ricardo Reid went up the walkway to place the time capsule, which will be encased and opened in 2066. Prime Minister Stuart fitted the Commemorative Broken Trident, which will be on permanent display at the monument; and Prince Henry placed the gnomon into the sundial.

The monument was then revealed to loud cheers from spectators, and an oversized flag unfurled, which brought tears to some people’s eyes.  Fifty lights of hope were released, and there was a marvelous fireworks display, which was a gift from the Co-operative Republic of Guyana.

Twenty-three year old student, Taisha Carrington, designed the monument, which shows “the Pathway from independence to the present”. The pathway to the monument features some of Barbados’ defining moments, with strategically placed benches that bear the names of successive leaders who steered the island through the last 50 years.