Corporate B’dos & Public Urged To Give 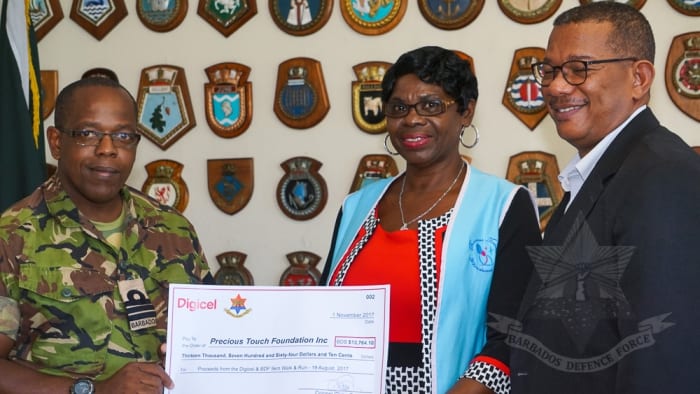 Corporate Barbados and members of the public are being encouraged to support charitable organisations that daily touch the lives of local citizens.

This encouragement came today from Chief Executive Officer of Digicel Barbados Limited, Alex Tasker, as he addressed a ceremony for the Digicel and Barbados Defence Force’s (BDF) Second Charity Walk and Run, where Precious Touch Foundation Inc. was presented with a cheque for BDS$13,764.05.

Mr. Tasker stressed that when such assistance was given to charitable organisations it would continue to contribute to a better Barbados.

He said that one of Digicel’s main pillars is that of becoming a good corporate citizen in whichever country it is located. Therefore, he stated that when BDF approached Digicel to start a relationship to make an impact on the lives of children, it was welcomed.

“We are very proud to have a relationship and be a part of an activity that has a multifaceted approach, encompassing persons from different demographics coming together to support a special and important cause,” Mr. Tasker stated.

Deputy Chief of Staff, Commander Aquinas Clarke, disclosed that next year’s walk and run would be held on Saturday, August 11, and promised that Precious Touch would continue to be the beneficiary of the proceeds, since it offered transformative experiences, by granting wishes to children who were chronically or terminally ill.

Stating that the BDF was a community, Commander Clarke stressed that its men and women were not immune to the challenges that existed in the society. “So, to have an organisation like the Precious Touch Foundation as one of our partners is but one of the ways that we give back to the society from within our small community,” he explained.

The Deputy Chief of Staff pointed out that while the defence of the nation was the BDF’s number one priority, the Force did not see its role as just the “employment of tactics or kinetic/non-kinetic means for the maintenance of this island’s sovereignty”.

According to him, the Force’s role was to contribute to the society through youth development, assistance to civil authorities, ministries, non-governmental organisations and charitable endeavours, such as the Precious Touch Foundation.

“We believe that as a small community of professionals within, and the defender of the Barbadian society, we are duty bound to play a significant role in the lives of the people. That role will encompass protection, development and enablement with a view to contributing to a Barbadian society that is secure, safe and caring,” he stressed.

Precious Touch Foundation Inc. is dedicated to the granting of wishes to children between the ages of two and 16 who have been diagnosed with life-threatening medical conditions and children who are terminally ill.

During the presentation, representatives from Digicel, Roberts, Accra Beach Hotel and Spa, CDEMA, Hilton, Trophy World and Pricesmart were presented with awards for partnering with the BDF.