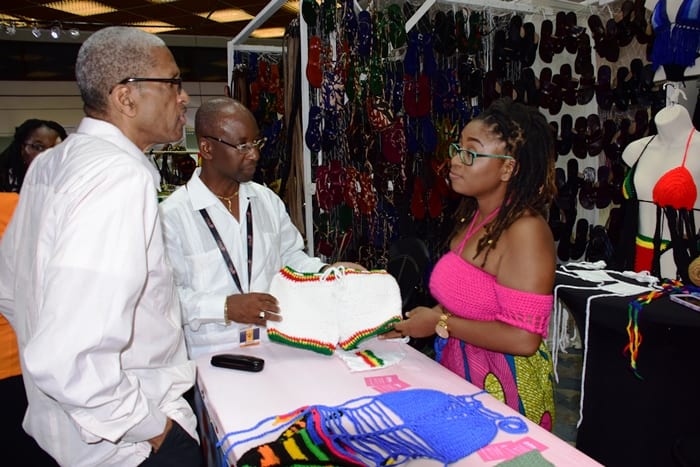 Minister of Culture, Sports and Youth, Stephen Lashley (centre), visiting one of the booths at the CARIFESTA Grand Market yesterday. (C.Pitt/BGIS)

Several changes have been made to the operations of CARIFESTA XIII to resolve some of the major issues being experienced.

Minister of Culture, Stephen Lashley, disclosed this last evening, as he spoke to the media during a tour of the Grand Market and Buyer’s Shopping Mall held at the Lloyd Erskine Sandiford Centre.

Mr. Lashley noted that the CARIFESTA XIII Secretariat was making a “concerted effort” to resolve issues of poor attendance at some events, as well as accreditation challenges.

While publicly apologising for the accreditation problems, the Minister said the Secretariat was looking into the issues in order to find solutions.  Pointing out that some of the issues were out of the Secretariat’s control, Mr. Lashley said efforts were being made to deal with the challenges as quickly as possible.

In addition to accreditation matters, the Minister confirmed that due to a low turnout of patrons to some shows, especially those in communities outside of the major entertainment areas, the Secretariat had chosen to revise the show times of performances.  As a result, performing arts shows will now begin at 6:00 p.m. to allow more persons the opportunity to attend.

“We have to look at the times at which they are being held…we are [also] looking to beef up the information so the communities in those catchment areas can know on a daily basis of the events,” he said.

Adding that members of the communities needed to “know where the events are”, as event specific information had been lacking, the Minister noted that a concerted effort was being made to disseminate information on the events.

Consequently, the CARIFESTA XIII marketing committee has decided to place a daily “What’s on” schedule in the newspapers and on the CARIFESTA Barbados 2017 Facebook Page.

Minister Lashley also announced that there would no longer be an entry fee for the Grand Market and Buyers Shopping Mall.  “…What it will do is help them to sell their items [and] have a larger pool of persons in which to showcase their items to,” he said, adding that persons who bought season tickets would be granted a partial refund.