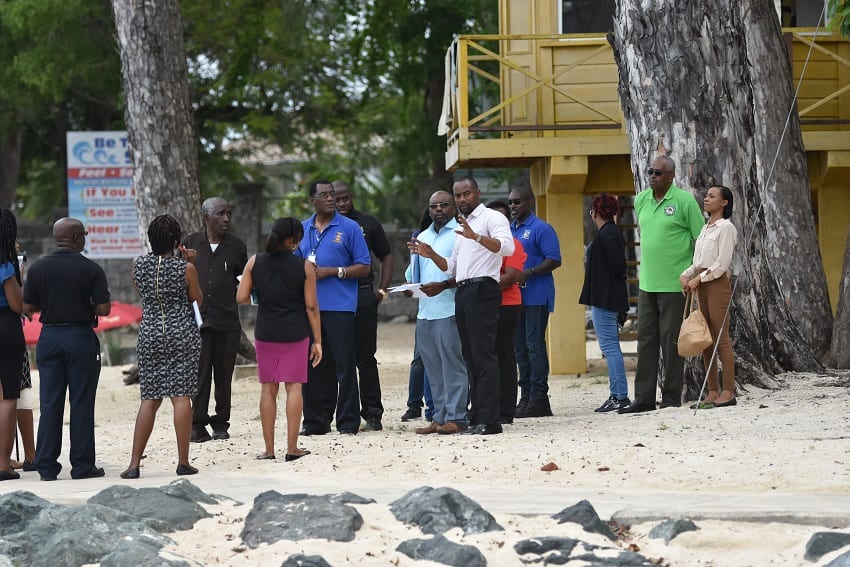 Minister of Maritime Affairs and the Blue Economy, Kirk Humphrey (centre), officials from the Coastal Zone Management Unit, the Reserve and members of the media on a recent tour of the Folkestone Park and Marine Reserve. (C.Pitt/BGIS)

Government is moving to protect Barbados’ reputation in the international arena and against the possibility of registered ships pulling their business from the island.

This follows an audit conducted on the island’s shipping agreements and arrangements and other maritime related issues by the International Maritime Organization (IMO), which identified 21 areas where the island fell short.

This was revealed by Minister of Maritime Affairs and the Blue Economy, Kirk Humphrey, who stated that Cabinet was expected to soon come up with a corrective plan of action to protect the country’s reputation.

“We saw an audit by the International Maritime Organization of our shipping agreements and shipping arrangements…and they were able to identify 21 areas where Barbados fell short… most of it pertaining to legislation either being weak, being non-existent or not being known by other people,” he said.

The Minister made this disclosure during a recent tour of the Folkestone Park and Marine Reserve with officials from the Coastal Zone Management Unit, the Reserve and members of the media.

“It seems a lot of these issues have fallen through the cracks because there was the issue of fragmentation and no one taking ownership of the issues that occurred,” Mr. Humphrey indicated.

He noted that the creation of a Ministry of Maritime Affairs and the Blue Economy was an effort to pull together the fragments into one. “We have tackled a major problem because we have a Ministry dedicated to ensuring that wrong things are made right.

Noting that there were a number of gaps to be filled, the Minister flagged legislation as one of the areas that “clearly” needed attention, especially with old laws still being on the books.

“We have to bring new legislation so you will see us making recommendations on legislation; we will make that legislation known to the people involved and the public… We have to correct the legislation where it is faulty. We have to take responsibility for it,” the Maritime Minister emphasised.

Mr. Humphrey warned that legislative matters concerning maritime issues had to be fixed if Barbados wanted to become an international destination and a place where people wanted to come and do business.

While stressing that the shipping issues must be resolved, Mr. Humphrey emphasised that in correcting the problems which Barbados presently faces, someone must be held responsible.