A Bright Future For Barbados & Cuba 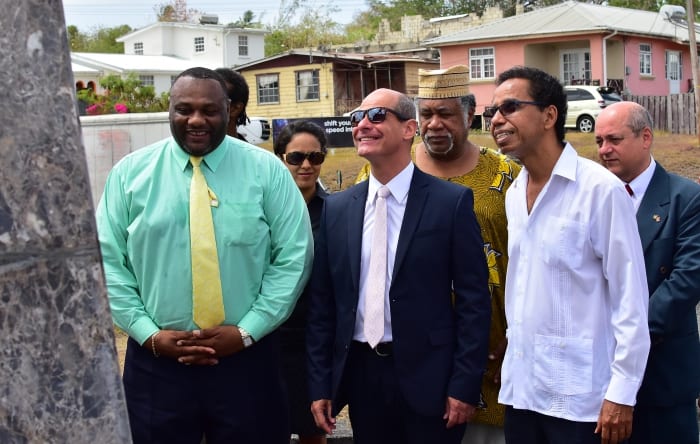 Cuba has vowed to continue working with Barbados and other Caribbean countries to seek compensation for slavery.

Deputy Minister of Foreign Affairs of the Republic of Cuba, Rogelio Sierra Diaz, made this declaration after the symbolic laying of a wreath at the Emancipation Statue, Haggatt Hall, St. Michael, today.

He was joined by Deputy Permanent Secretary in the Ministry of Creative Economy, Culture and Sports, Terry Bascombe, members of the local Pan African community and a small Cuban delegation, which included  Cuban Ambassador to Barbados, Dr. Francisco Fernández Peña and Director for Central America, México and the Caribbean at the Cuban Ministry of Foreign Affairs, Jorge Luis Mayo.

“We will continue working with Barbados and the other countries of the region, so they can be compensated for the damages caused by slavery.  Of course, both of our countries have much to contribute, in terms of the unity of the Caribbean and Latin America, which is a very important relation,” he said.

Acknowledging that both Cuba and Barbados were under new leadership, he said he believed the future between the two nations was “very promising”.

“We see a very optimistic future. Our two leaders will certainly work together in order to strengthen relations between the two peoples.  That is one of the reasons for my visit here in Barbados. I have come to consolidate the ties between Barbados and Cuba.  We are certain that the next few years will be very important in order to achieve those goals.”

He pointed out those goals included continuing with current collaborations, providing assistance in sports and health, and seeking to address the effects of climate change and disaster risk.