A Call For More Support For The Arts 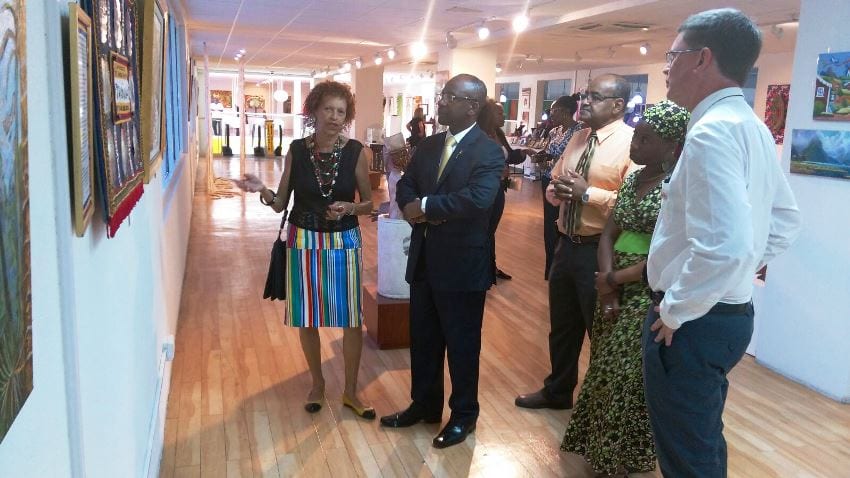 Minister of Culture, Steve Lashley, and officials looking at some of the artwork on display during a tour of the Massy Art Gallery at Warrens yesterday. (J.Weekes/BGIS)

During a walk-through of the pop up art gallery at Massy Stores Super Centre, Mr. Lashley praised the management of Massy (Barbados) Ltd. for hosting the “Rebel-Celetic” art exhibition, which is curated by member of Artist Alliance Barbados, Oneka Small.

“It represents good business sense…I hope that this is going to be an opportunity to encourage other corporate entities in Barbados to see that they too have a responsibility.

“This is an excellent example here at Massy of an entity that has been involved in business in Barbados for a long time, showing that there could be a connection, a synergy, between the company…and of course the local artistic community,” the Culture Minister noted.

According to him, there was significant economic value in corporate Barbados investing in the arts, as owners of the entities would be able to have visual arts products displayed along with their corporate brand.

Remarking that he was “very impressed” with the exhibit, he encouraged more businesses to follow Massy’s lead.

The exhibition, which opened on Wednesday, April 5, will run until Sunday, April 30. The organisers also expect to host exhibitions in August for CARIFESTA XIII, and in November for Independence.