‘A Ganar’ Building Skills For The Future 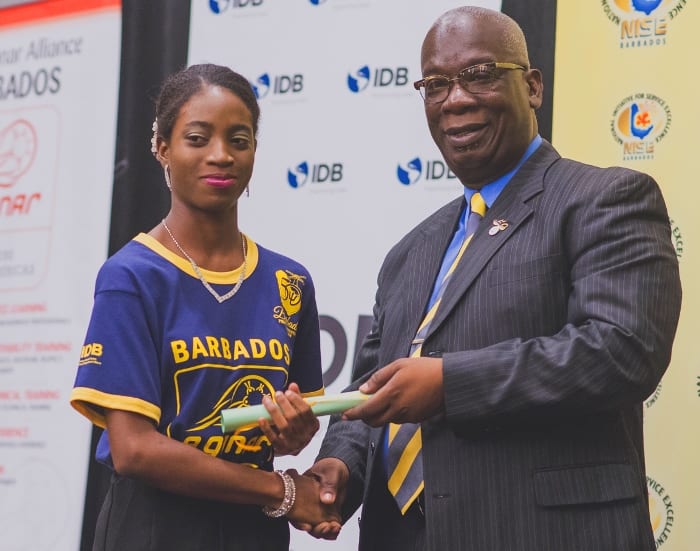 Odessa David receiving her ‘A Ganar’ Employability Skills Certificate from Minister of Education, Science, Technology and Innovation, Ronald Jones. She was also the awardee of the Technical Vocational and Educational and Training NVQ certification in Communications. (Andrew Browne Photography)

By successfully completing the A Ganar program, Barbadian students are showing, more and more, their ability to develop skills and qualities required in the workplace.

Education Lead Specialist with the Inter-American Development Bank (IDB), Dr. Sabine Reible-Aubourg, underlined this recently in her address to over 250 students from secondary and post-secondary institutions, present at the A Ganar graduation ceremony, at Hilton Barbados Resort.

Dr. Reible-Aubourg, who was also on the island to assess the progress of the Skills For the Future (SFTF) Program in November, commended Barbados.

Moreover, she noted that their involvement in the sports’ component of A Ganar brought out their athletic prowess and, through working and playing with others, highlighted their knack for team work.

“[It all] speaks to your self-discipline because you had to follow and respect rules and, most importantly, it demonstrates that you have ambition for yourself and that you are willing to improve yourself!” she stressed.

According to the IDB official, the A Ganar program, which started here in 2013, continues to be one of the success stories of the SFTF.

Elaborating, she said: “Since then, the program has grown and expanded. In 2013, it started in two secondary schools and today it has expanded into nine and two post-secondary institutions where approximately 1,200 students have registered to participate.  In 2016, due to a grant by the United States Agency of International Development, three more schools were added.”

It was pointed out that the IDB and Government had learnt a lot and was improving A Ganar yearly. Dr. Reible-Aubourg noted they took great care to monitor and identify “the parts that worked well and those that needed improvements in order to make it more attractive and relevant” for the youth.

Highlighting some outcomes of this monitoring, she said: “The program has experienced a 20 per cent increase in its graduation rate as compared to 2013; there has been an increase in the number of students placed to work assignments and currently, students can choose from 17 areas for job attachments compared to only seven in 2013.”

The program also organised its first summer camp this year, which was called the Summit for Employability, and 13 students in this third cohort were employed after their work assignment.

Additionally, for the first time this year, employers were asked to fill out a survey to obtain feedback on the work performance of A Ganar participants. The IDB Education Specialist said the responses were favourable. 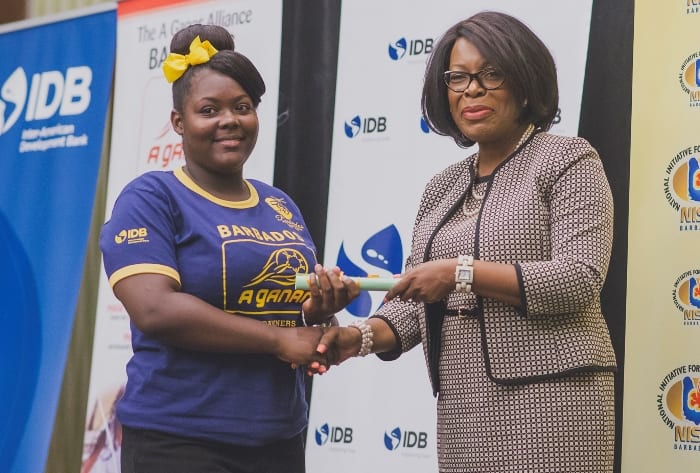 Also, addressing the students was Minister of Education, Science, Technology and Innovation, Ronald Jones, who spoke to the myriad challenges and problems they would encounter in their life’s journey.

Acknowledging that this was inevitable, he said it was how the A Ganar graduate handled these that would determine the path they took career wise and otherwise.

“This programme is an excellent one. It is a commitment by the Government of Barbados and by all of the partners – persons who care about humanity and young people…. A Ganar and the school system are here for you…. Don’t give up hope, strive, persevere and give it the best that you can give it now that people care about you…!” he stressed.

Meanwhile, Anna Barrett, Program Officer with Partners of the Americas, the executing agency for A Ganar, said Partners was honoured to run the program throughout Latin America and the Caribbean, and welcomed the graduates to “a community of over 15,000 alumni throughout the western hemisphere”.

Emphasising that ‘A Ganar’ required hard work and determination, she maintained these were qualities the graduates already possessed.

“You are at the heart of all we do. Today, you will begin a journey as an        A Ganar alumni, and like the program itself, it will require determination and dedication…. We can’t wait to see what you do next,” she told the youth.

A Ganar is an innovative programme, which is the Spanish for “to win” or “to earn”.  It was created 10 years ago out of an idea from Brazilian soccer player, Pele, and former IDB President Enrique Iglesias, to use soccer as a vehicle to channel the energy and passion of youth to help them develop life skills and find a way to maximise their full potential and to become productive citizens.