A High Commissioner For A Day 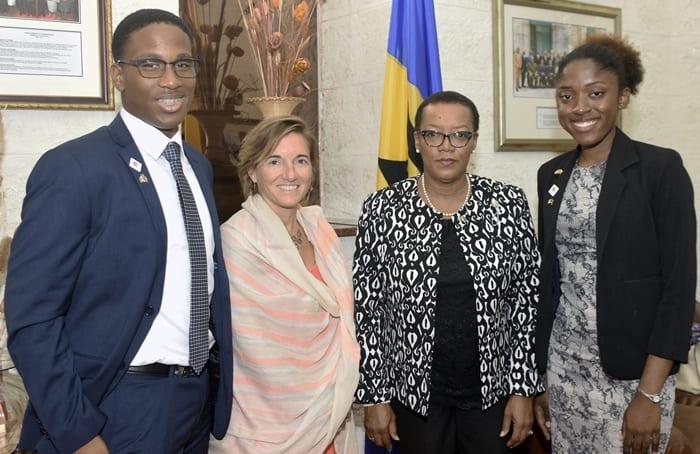 Two young people were recently given the opportunity to experience a day in the life of the High Commissioner, after winning a regional competition hosted by the Canadian High Commission.

Nineteen-year-old Antiguan, Rose-marie Reynolds, and 16-year-old Christopher Brathwaite from Barbados, placed first and second respectively, which led them to hold the posts of High Commissioner and Deputy High Commissioner.

Senator Maxine McClean, who met with the winners recently at the Parliament Buildings, explained that the competition was an excellent opportunity to expose young people to the work of the Ministry, and let them realise “it’s a lot more hard work than glamour”.

The competition, which was held to raise awareness of women’s issues, was launched a month earlier, and invited young persons aged 16 to 19 from across the region to submit a short video expressing how they could be a champion for women’s rights in the Caribbean.

Speaking to the purpose of the competition, Senator McClean added that women’s rights, which she described as “an important issue for our society”, requires more exposure and engagement from all members of society, especially the youth, through these types of activities.

Canadian High Commissioner, Marie Legault, lamented the small number of entries from across the region but acknowledged that it was the first year for the competition, and she now had a better understanding of how to approach it in the future.

“I think they were a few issues this year with communication and the reach it had across the region, but in future, we will look to work on using different [methods] of communication so it reaches more people and raises greater awareness,” she stated.