A Long Road To Recovery For Dominica

Residents walking through the streets of debris in Roseau, Dominica following the passage of Hurricane Maria on September 18. (M. Elcock/BGIS)

Dominica, the Caribbean’s Nature Isle, was stripped of its natural beautiful green trees and shrubs gracing the mountain side when Hurricane Maria slammed into it on September 18.

Though nothing was left unscathed in the overnight destruction that many will remember for a long time, Barbados’ teams on the ground remain committed to doing all that they can to assist the country on its road to recovery.

“Whoever we could help, we would help. It is very important that we get aid out to help the impacted communities,” said Chief of Staff of the Barbados Defence Force, Colonel Glyne Grannum.

He was on the ground in Dominica last week, where he joined other military personnel who have one mission in mind – to help focus on recovery.

Speaking during an interview with the Barbados Government Information Service (BGIS) on the Fond Cole, Woodbridge Bay Port in Dominica, Colonel Grannum said the delivery of supplies was being accelerated, even as efforts were ongoing to clear a clogged road network to get aid into the most impacted communities.

At the local level, supplies are being ferried into Dominica on two vessels from the Barbados Coast Guard (BCG) – the Rudyard Lewis and the Leonard C. Banfield.

Lieutenant Coast Guard and Commanding Officer of HMBS, Rudyard Lewis, David Harewood, described the scenes in Dominica as one of “utter devastation”.

“Having been there in 2015 when they were dealing with Erika, what I saw there [this time] showed me the magnitude of the damage that Hurricane Maria did to that country.

“Everywhere you look there are roofs torn off; at night people are trying to light fires to get food to keep themselves,” he said.

For him, the relief effort to the Nature Isle will be weeks of continuously taking relief supplies into those who were impacted. 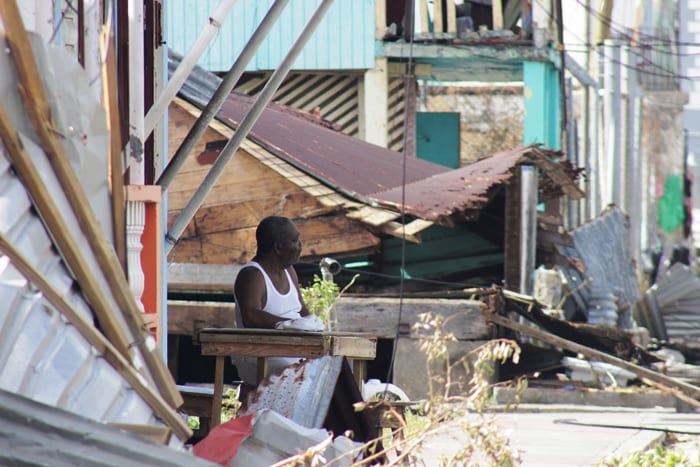 This resident in Portsmouth, Dominica is in utter shock at the devastation caused by Hurricane Maria. (M.Elcock/BGIS)

He explained that the HMBS Rudyard Lewis transported 71 persons, including security teams from the Barbados Defence Force, a BGIS team and other media, a team from the Caribbean Disaster Emergency Management Agency and artisans from the BDF to help with the relief effort.

“While down there, we were able to help execute some of the relief missions into certain areas that were affected to help deploy water and supplies to those communities.

“We returned today (Monday, September 18) with 48 evacuees from Dominica. Of that number, 23 were Chinese, 13 Barbadians, three Canadians, three USA citizens, four citizens from Trinidad and Tobago and St. Lucia, and two from Dominica,” he said.

While speaking of what it was like in Dominica, the boat Captain said there was a sense of loss among the people as they walked the streets in search of supplies.

“The critical things Dominica needs right now are water, medical supplies, purification tablets that would help in their rivers to clean the water, and non-perishable food items. Clothes are not a major thing for them right now.  It is those things to sustain them to the next day and the next day as we keep going forward,” he said.

Noting that the Barbados Coast Guard was the first on the ground, Lieutenant Harewood said, the Rudyard Lewis did two supply missions along the west coast of Dominica last week to get supplies of water and hygiene kits into Grand Savenne, Salisbury and Colihaut.

The Lieutenant noted that the team was welcomed without a problem and the residents were receptive in getting the supplies from the vessel, and distributing them among themselves. 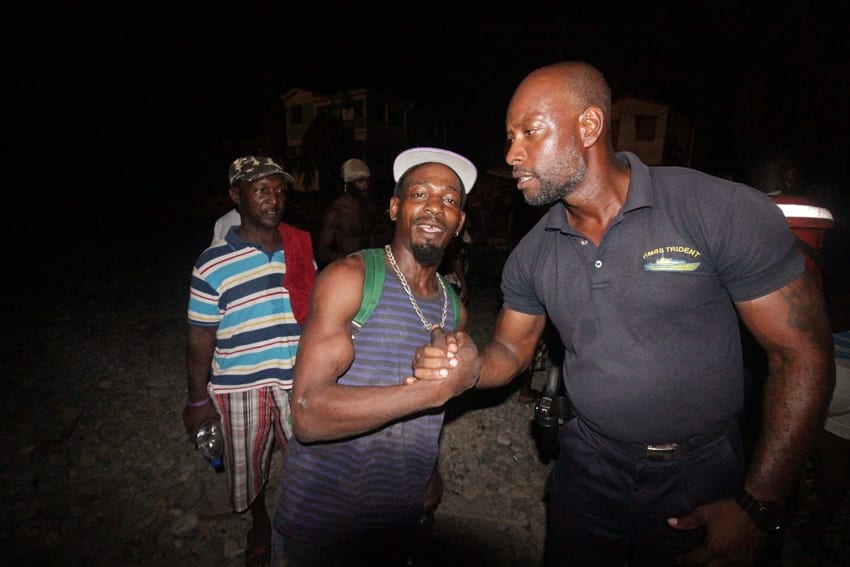 A resident at one of the drop-off points thanking Lieutenant Coast Guard and Commanding Officer of HMBS, Rudyard Lewis, David Harewood, for his assistance in supplying water to the community. (M. Elcock/BGIS)

Lieutenant Harewood explained that the people in Dominica were in a state of panic, which sometimes resulted in them being reckless in their behaviour. “They are just trying to get some relief, so once they see things coming, yes they want them,” he explained.

However, he gave the assurance that the situation was being dealt with by the security forces on the ground.  These include members of the Royal Barbados Police Force combined with other security personnel from around the region.

“Security on the ground is going to come back. The Regional Security System, in consultation with the Commonwealth of Dominica, has set up security teams and more security forces are coming in just to bring a semblance of order,” he said.

The security forces have cordoned off certain areas and are trying to get a structure in place to then reach out to all the affected communities, taking into consideration that some roads remain blocked and access can only be gained by sea.

Meanwhile, another critical area for Dominica is that of communication, which did not exist initially, following the hurricane’s passage. “Gradually, things are picking up. When Lime and Digicel came up you were getting only text messages because a lot of calls were still not connecting,” Lieutenant Harewood said, pointing out this was as a result of everyone “bombarding” the system at the same time.

When a BGIS team visited Portsmouth and a part of Dominica’s capital, Roseau, clean-up efforts were already under way, with debris being swept to the side of the road, and vehicle owners trying to clean their cars or struggling to dig them out of the dirt.