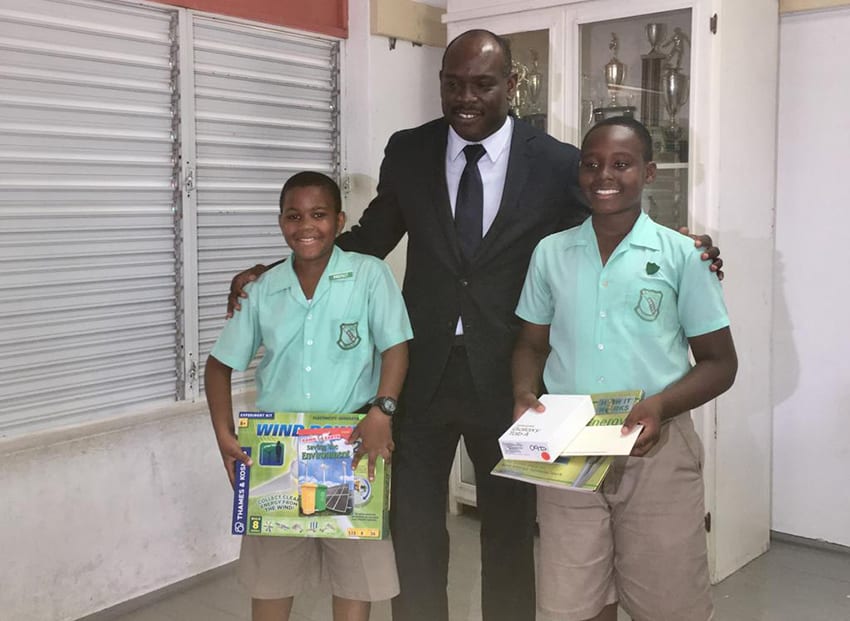 Students of the Milton Lynch Primary School have been encouraged to set the bar high and continue their good work because competition was required to bring the best out of them.

Acting Minister of Energy and Water Resources, Ryan Straughn, gave these words of encouragement to the winners of the Ministry’s Energy Month Essay and Colouring Competitions, as well as prefects of Milton Lynch Primary, during a ceremony today at the school at Water Street, Christ Church.

Urging principal Everton Briggs and teachers to implement the necessary programmes to keep students interested in science especially the area of renewable energy (RE), Mr. Straughn told students to discuss pursuing a career in RE with their parents.

“Renewable energy is really a path that Barbados needs to pursue in an aggressive way and provide opportunities and alternatives for employment going forward.…RE does really present the opportunity for young people to be able to chart the future for Barbados,” he surmised.

Receiving their prizes, donated by the Barbados National Oil Company, were Raphael Lovell and Dontré Whitehall, who copped first and third place, respectively.  Raphael was awarded a Samsung tablet, an Island Safari tour and a science book, for his essay which highlighted how renewable energy impacts our environment.

Dontré’s essay explained how his family utilized energy efficiency practices in their home and he was awarded an RE science kit and a science book.

Acting Chief Geologist, Jamal Gill, revealed that as part of the Ministry’s efforts to have energy efficient Government buildings, the Ministry would be donating an air condition inverter system to the school’s library. He hoped that by placing the system there, students would be encouraged to spend more time reading, which would assist in developing their composition and comprehension skills.

Out of the 30 essays submitted, Milton Lynch’s submissions were ranked in the top six.