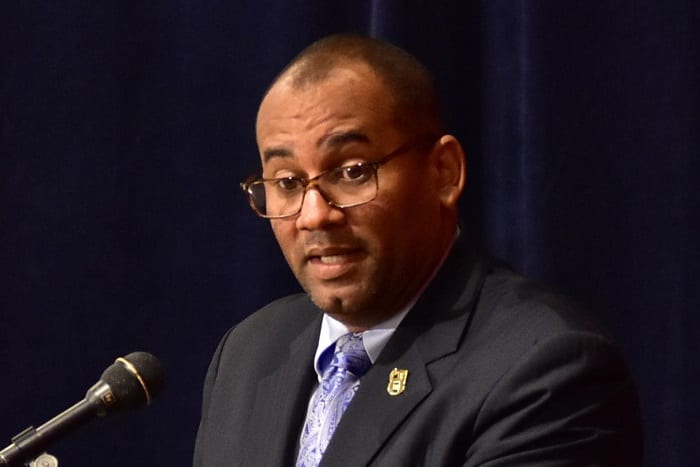 Acting Prime Minister, Richard Sealy, delivering the feature address today at the start of the Week of Excellence 2018 at the Central Bank of Barbados. (C.Pitt/BGIS)

The Barbados Sustainable Recovery Plan (BSRP) has received the thumbs up from Acting Prime Minister Richard Sealy, who described it as a workable document.

While delivering the feature address today at the start of the Week of Excellence 2018, at the Courtney Blackman Grande Salle, Central Bank of Barbados, Mr. Sealy told his audience that the BSRP was not just another plan.

“We often get criticised for producing plans, but what I certainly liked about the Barbados Sustainable Recovery Plan is the fact that actual targets and dates are set and that certainly attracts me….

“I am aware of the public concerns and the pressing need for urgent implementation of policies and strategies. In light of such concerns, I can assure you of the unwavering support that we have as a Government to seeing the implementation of this plan,” he stated.

The Acting Prime Minister noted that the plan serves as a blueprint for leading Barbados out of its current economic challenges and provides the framework for placing the country on a firm footing towards economic prosperity, an improved standard of living and an enhanced quality of life for all citizens.

“The distinguished feature of this document, however, is the degree to which extensive and wide-ranging consultations took place, in order to ensure that the document benefited from the greatest possible number of ideas and recommendations for reversing Barbados’ current economic trajectory,” he stressed.

He pointed out that the plan has as its vision a society that is economically, environmentally and socially sustainable with a return to investment grade.

Mr. Sealy identified the BSRP’s six broad goals as to: build a comfortable net international reserves level by 2020; achieve fiscal sustainability through a balanced budget by 2020/21; accelerate real GDP growth to reach 3.0 per cent by 2021; establish a credible and sustainable debt management plan; enhance and safeguard the provisions for social development; and reduce the unemployment level to an average of 8.0 per cent by 2020.