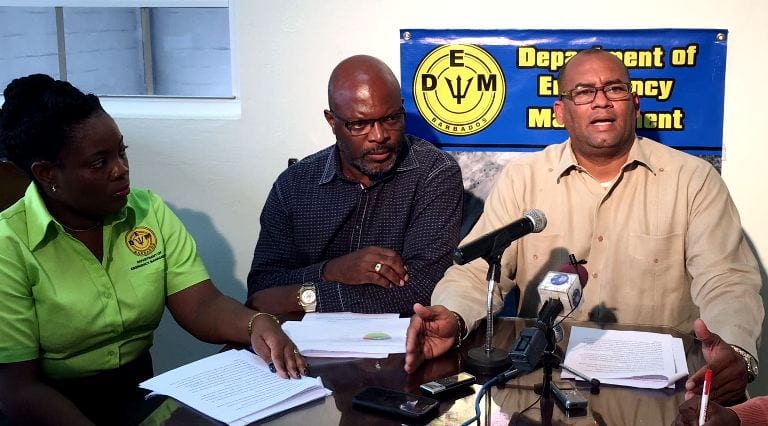 Acting Prime Minister Richard Sealy is urging business people to abide by the protocols which have been established to deal with the shutdown of Barbados during the hurricane season.

Mr. Sealy made the comments today during a press briefing at the Department of Emergency Management’s (DEM) Warrens headquarters, to update the media following the passage of Tropical Storm Matthew.

Those present included Attorney General, Adriel Brathwaite, who is also the Minister of Home Affairs; and Director of the DEM, Kerry Hinds.

The Acting Prime Minister said the thorny issue of businesses re-opening during the national shutdown was receiving the attention of the Mr. Brathwaite and his Ministry.

“You don’t like to have to legislate everything. You would expect that where national safety is concerned, where life and limb are concerned, we should be able to work together. Do we have to look at it? Maybe we do… We expect people to cooperate because these decisions are made in the interest of safety and saving lives….

“An event like what we had yesterday … had we probably not taken the decision, it is entirely possible that somebody…could have perhaps lost their life,” Mr. Sealy opined.

He stressed that by taking the decision to close businesses, stay indoors and establish the regime for shelters to function, risks were minimised. He further suggested that there was a need for stakeholders to discuss necessary issues, including the giving of the all clear.

“There is a protocol in place, [but] we may need to inform people a little better on it because there are critical operations that you would expect to have a head start on members of the public in order to get the country back to normalcy in the most efficient and organised manner. Those are some issues that are receiving the attention of the Ministry of Home Affairs and the Department of Emergency Management,” the Acting Prime Minister reiterated.

Mr. Brathwaite added that there were protocols in place which had worked for the country for many years. “But there are new actors that we probably need to get in to sit down with us….“If it is one thing that has come out, it is that we have new people who have never been a part of this process before, and we need to ensure they understand their roles. So, we are going to get to that,” he stated.

Mr. Sealy pointed out that as of 8:00 a.m. today, the National Emergency Operating Centre (NEOC) had received 63 reports. He explained that 24 were of fallen trees; seven related to utility pole; nine reports were of power outages; nine reports were logged of damage to houses; and eight of flooding across the island.

He reported that all agencies with responsibility for rehabilitation works had been informed and their teams were assessing the situation.

He added that the Minister of Transport and Works, Michael Lashley, and the Acting Minister of the Environment, Senator Jepter Ince, were in the field touring some Bridgetown areas to assess those communities which were susceptible to flooding.

He continued: “In the fullness of time there will be further reports. The damage assessment surveys will be done. Rather than give any figure that is too vague, we need to properly assess exactly how our infrastructure has been impacted; how the various houses and business places have been impacted; and then we can speak to those issues from a more definitive perspective.”

The Acting Prime Minister stressed that there were no injuries and no loss of life and Barbados was back to normalcy, with the Grantley Adams International Airport operating since 8:00 a.m. and cargo in the port being discharged as early as 8:00 a.m.

He thanked members of the emergency teams and those at the NEOC for their outstanding work during the past 72 hours, and noted that the Centre would continue to receive and process any reports made by the public. In addition, Mr. Sealy thanked the public for its cooperation.