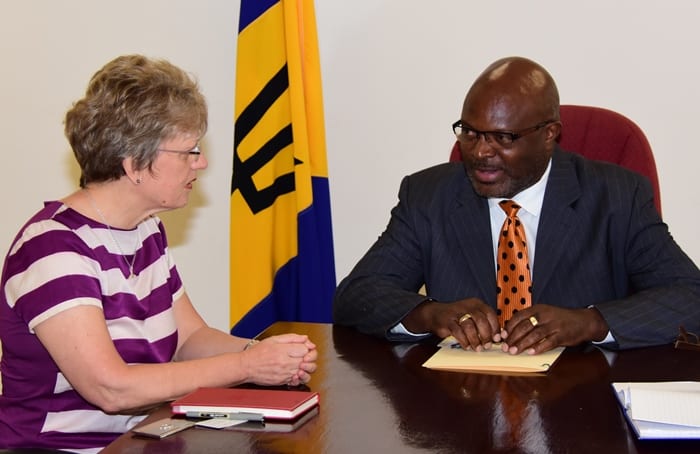 The recent bombing attack at the Manchester Arena has been condemned by this island’s Attorney General, Adriel Brathwaite, and recently appointed British High Commissioner to Barbados, Janet Douglas.

During a courtesy call at the Office of the Attorney General in Wildey, the High Commissioner expressed her concern and sadness at the unfolding of events and told the Minister that such acts should be “met with defiance” and not deter persons from their usual way of life.

Mrs. Douglas, who took up her appointment in April this year, noted that she spent several years living in a volatile climate as she was stationed in Turkey and such acts were a regular occurrence during her tenure.

Noting that the United Kingdom and Barbados have maintained strong relations over the years, Mr. Brathwaite added that this was especially so in the area of crime and security. He further pointed out that the region needed developmental assistance in this area.

The topic of youth and unemployment, particularly with regard to males, was also the focus of discussion, with Mrs. Douglas expressing an interest in working with Barbados and the Eastern Caribbean to tackle this issue.

In addition, the two officials discussed the upcoming elections in Britain, scheduled for June 8.