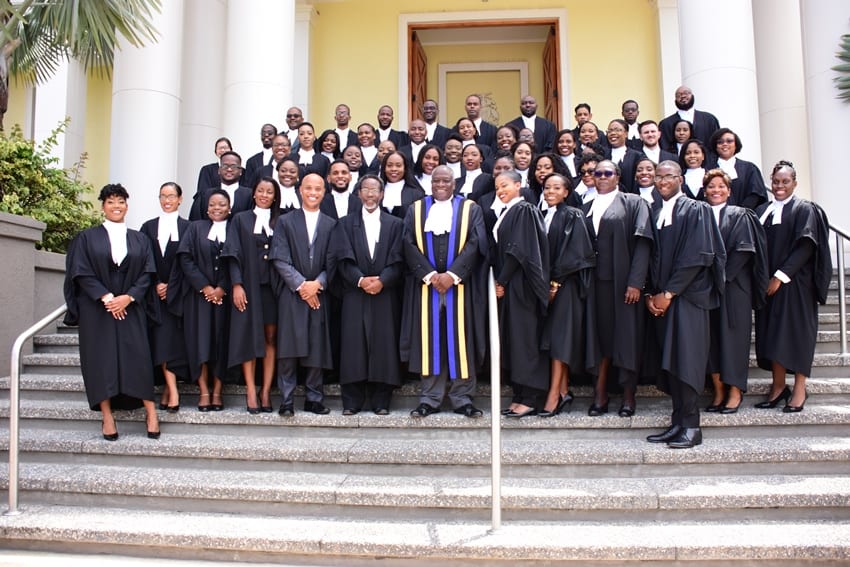 Chief Justice Sir Marston Gibson (front centre) with the new attorneys who were admitted to the Bar during a Special Sitting of the Supreme Court last Friday. (C. Pitt/BGIS)

He said with an unacceptable 700 individuals on remand at HMP Dodds Prison, and plea bargaining set to commence within the “next couple of weeks”, there were not enough attorneys practising at the criminal Bar.

Mr. Brathwaite expressed these concerns during a Special Sitting of the Supreme Court last Friday to admit the new attorneys to the Bar to practise law in Barbados.

“It is the practices at the criminal bar that I am concerned about. For example, some attorneys will do the bail hearing and then not proceed with the substantive matter,” he lamented.

He also expressed concern that senior attorneys were not spending enough time with young lawyers, but encouraged the new attorneys to reach out since they did not know everything.

“To the seniors, one of the prerequisites of going forward should be the number of young people you take under your wing and assist with mentorship,” the Attorney General suggested.

However, he advised the new legal minds to become “good lawyers”, which he stressed, did not mean financial success. “There are a lot of attorneys who are successful financially and are still not good lawyers,” he stated.

He also told those present that having reviewed the résumés of the new attorneys, the Bar was strong as a result of them being admitted to practice.

Meanwhile, Chief Justice Sir Marston Gibson cautioned the new attorneys that there were no shortcuts in the profession. “Always be prepared. You are at the start of what I hope will be a long and illustrious career. Work hard and do not cut corners,” he advised.

Sir Marston further reminded the attorneys that their reputation was their most valuable possession and they should guard it carefully.

Joining the Attorney General’s call for more of the new attorneys to dedicate some of their time to criminal law, Sir Marston said there were a number of new areas within that area where they could work.

He drew reference to the Drug Treatment Court and Alternative Dispute Resolution.

“My charge to you today is to see yourself as vanguards in this process. You will earn your fees by being a part of the process,” he stated.