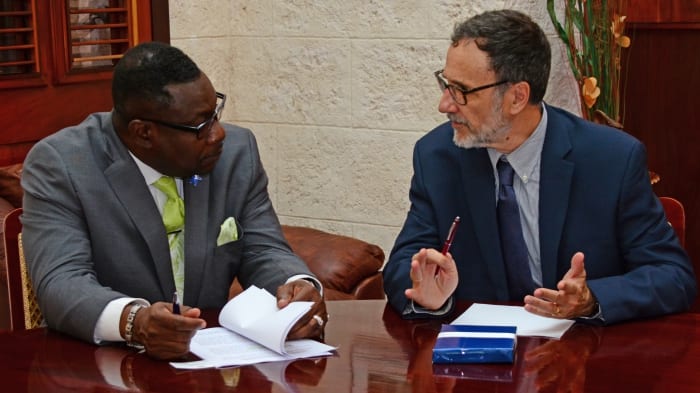 Acting Minister of Foreign Affairs and Foreign Trade, Steve Blackett, listening attentively to Ambassador of the State of Israel, Mordehai Amihai Bivas, during their recent meeting in Parliament. (C.Pitt/BGIS)

The “pressing issue” of water management was at the fore during a recent courtesy call with Acting Minister of Foreign Affairs and Foreign Trade, Steve Blackett, and Ambassador of the State of Israel, Mordehai Amihai Bivas.

Mr. Bivas said the issue not only affects Barbados but the Caribbean region on a whole, and comes on the heels of ongoing planning for water management training, scheduled to take place later this year. This initiative, he explained, would target desalination, water purification, and a “very wide range of water issues”.

The officials also discussed Israel’s ongoing developments with renewable energy in solar, wind, turbine, and in particular sea waves, which the Israeli Ambassador said would be “very beneficial” to Barbados.

The status of negotiations for a Double Taxation Agreement between the two countries was also discussed, as well as an upcoming conference in Barbados, which will focus on information technology, water management, agriculture and security.

Minister Blackett highlighted the upcoming 50th anniversary of bilateral relations between Israel and Barbados and assured the Ambassador that the Government of Barbados remains committed to building a solid relationship.