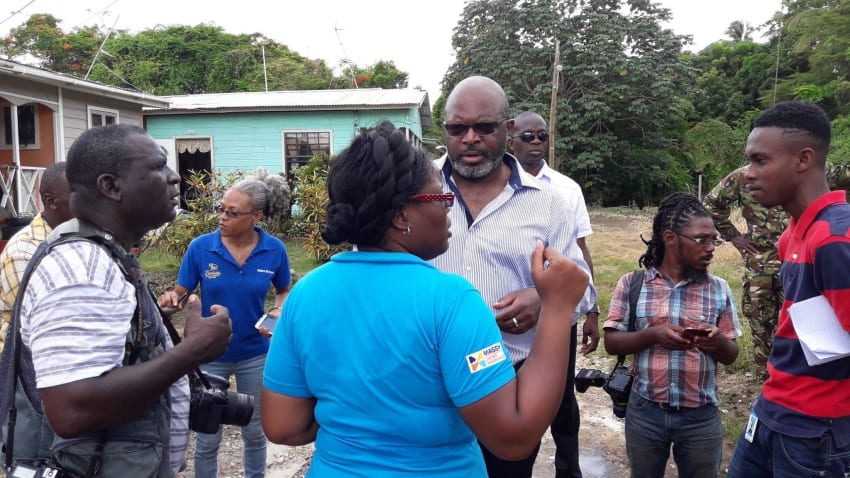 Attorney General and Minister of Home Affairs, Adriel Brathwaite, has pledged to find a solution to flooding in Round-the-Town and Gill’s Terrace, St. Peter. These two districts were hard hit by flooding following the passage of Tropical Storm Harvey last Friday.

Mr. Brathwaite, accompanied by Minister of Housing Lands and Rural Development, Dennis Kellman; Director of Emergency Management, Kerry Hinds; and her Deputy, Captain Robert Harewood, got a first-hand look at the damage caused by the raging flood waters.

While addressing reporters at Round-the-Town, the Attorney General promised relief to the flooding victims.

“From what I am seeing, this is a problem that goes back to probably as early as 1984 and this means that we really do need to find a solution.  This is probably the second time as Minister responsible for Home Affairs that I have been down into this area.  What I will say, is that those residents that we visited, who need immediate assistance, we have found solutions for them.  Most of them need long-term solutions and we are going to have to send in our team from Rural [Development] and Welfare to decide as to how we can render further assistance [over the] longer-term,” he stated.

The Attorney General also knocked the indiscriminate illegal dumping by some Barbadians in the area, which he believed was a major contributor to the flooding.  Pointing out that illegal dumping was not a new thing, he pleaded with Barbadians to stamp out the practice. 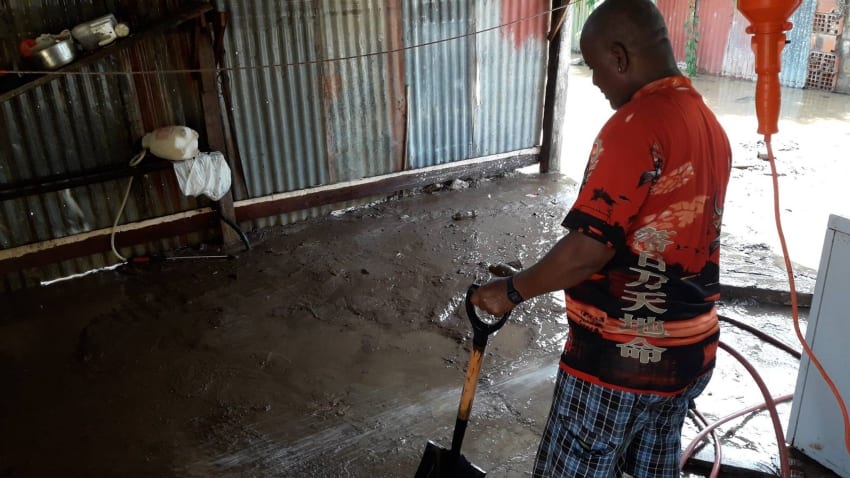 A resident of Gill’s Terrace, St Peter cleaning his home after the passage of Tropical Storm Harvey. (A. Skeete/BGIS)

Meanwhile, Mr. Kellman gave an update on efforts to alleviate flooding in the area and revealed that the Barbados Tourism Investment Inc. would shortly commence tunnelling east of the highway in the area for easier water flow. Apart from the tunneling, Mr. Kellman also mentioned corrective work on the bridge in Speightstown.

“The tunnels under the bridge are too small and they [BTII] will also have to do some work inland to ensure that the water flows freely and that we do not have this situation that occurred here.  The blockage is at the bridge and it caused the water to backup and move houses off their props,” he explained.

DEM Director, Kerry Hinds, said while reports of damage were received across the island, it appeared that St. Peter had sustained more severe damage than other parishes.

She said the tour allowed officials to assess what had occurred and to hear the victims’ plight.  “The Welfare Department will do a socio-economic assessment of the situation and we would come up with a number of solutions to remedy the problem.  Hopefully, as we go through the process, it would not be too long, as we note the position that our victims are in,” she underlined.