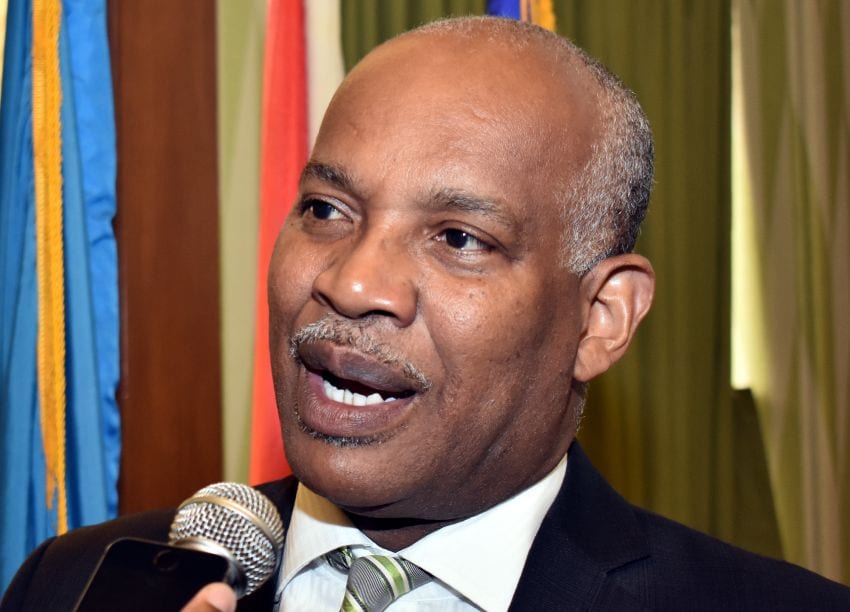 Attorney General and Minister of Legal Affairs, Dale Marshall, speaking to the media on the sidelines of the Caribbean Financial Action Task Force (CFATF) Plenary at the Hilton Barbados Resort today. (C.Pitt/BGIS)

Delays in bringing accused persons to trial is receiving the attention of Government.

This assurance has come from Attorney General and Minister of Legal Affairs, Dale Marshall, who has also indicated that Government is in the process of implementing measures to tackle the situation.

He made these comments on the sidelines of the Caribbean Financial Action Task Force Plenary session at the Hilton Barbados Resort today, and against the backdrop that eight murder accused have applied for bail.

“This is something that concerns me greatly. When you have eight murder accused applying for bail it means that the system has not responded to the need to get a trial as quickly as possible,” he lamented.

However, he told the media that Government was considering legislative approaches, for which some of the preliminary work was done under the previous administration, on issues related to gang violence.

“I have asked to see those files so I can form a view and take advice as to whether legislation to deal with the proliferation of gangs is something we need to look at in Barbados,” he said.

However, the Attorney General noted that discussions were also held with the Director of Public Prosecutions to explore ways in which the backlog in the court system could be reduced or eliminated, and how murder trials could be made a priority and moved through the system.

“We have in the region of 64 murder accused waiting for trial. There is no doubt that if they can be put to trial quickly, the cavalier approach they have to life and limb, we can begin to wrestle,” he maintained.

He pointed out that Bermuda experienced similar challenges with their murder rate until speedier trials were introduced. “The murder rate began to drop because people began to recognize that there was a swift response and the consequences would be sure and come quickly.

“[It is] one thing for the police to put measures in place to investigate crime and charge the offenders, but it is a completely different thing if somewhere along the line we drop the bar at this end,” Mr. Marshall stated.