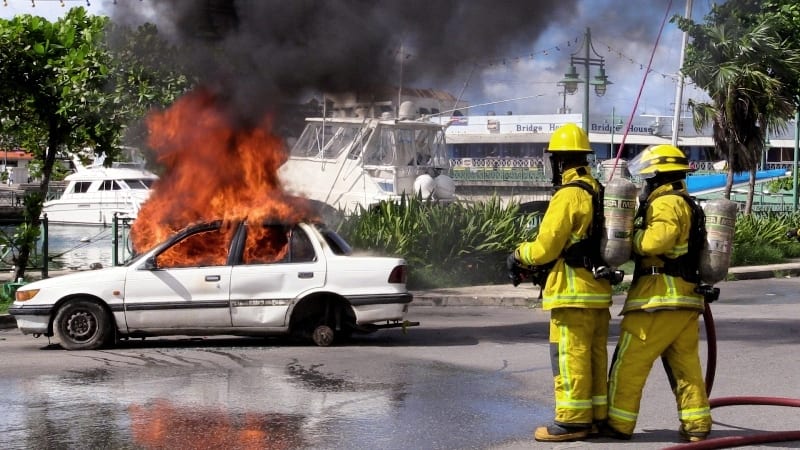 Firemen preparing to extinguish the blaze from this burning vehicle during this morning’s simulation and drill in Bridgetown. (E.Jones/BGIS)

Traffic slowed to a crawl in and around Bridgetown this morning as the Barbados Fire Service (BFS) staged a simulation to highlight its skills in effecting various types of rescues.

The “screams” of those trapped in the vehicle, coupled with the shrill of sirens, slowed traffic to a crawl and lured passers-by, staff from the Treasury Building and nearby stores to get a glimpse of the rescue simulation staged by the BFS.

Attorney General and Minister of Home Affairs, Adriel Brathwaite, witnessed first-hand how firemen exhibited their skills to extinguish flames from a burning car on the Charles Duncan O’Neal Bridge; and to rescue three persosn trapped in a vehicle and a man floating in the Careenage.

Mr. Brathwaite urged fire officers to learn from today’s exercise and improve on areas where there were weaknesses. He also challenged them to include an activity involving a high rise building in their next simulation, recognising that was the direction in which Barbados was now going.

The Minister of Home Affairs also rode in one of the BFS’ new appliance which could respond to fires and multi-hazard incidents. He disclosed that Government was in the process of upgrading its fleet, with $2 million being spent this year and between $7 and $8 million in the future.

Mr. Brathwaite also declared open an all-day exhibition in Independence Square, and urged members of the pubic to use the opportunity to find out more about how they could be more proactive about fire prevention.

Meanwhile, Chief Fire Officer, Errol Maynard, said the activities allowed the BFS to test the skills of the units and ensure that officers knew how to use the equipment in a real life situation.

He also noted that the department was in the process of filling vacancies to add to its complement of 239.