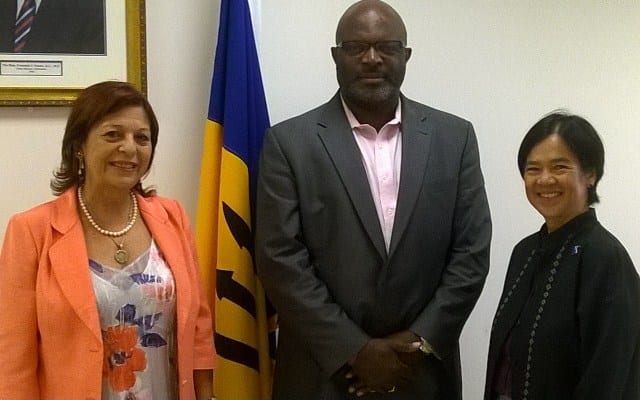 Attorney General Adriel Brathwaite is standing by his position that a weakening family structure is the root cause of problems among the island’s youth.

He shared his view with UNICEF Regional Director, Marita Perceval, and other UNICEF officials, during a courtesy call at his Wildey, St. Michael, office this morning.

Mr. Brathwaite said that a poor family structure was the underlying issue faced by children housed at the Government Industrial School, as well as by inmates of Her Majesty’s Prison Dodds.

And, he has suggested that if there is any money to be spent, it should be invested in strengthening the family structure and the overall framework.

“When I see children not being allowed to be children and being taken advantage of, [I believe that] something has to be done,” he contended.

Noting that there was a need to save and protect the island’s children by creating healthy environments, the Attorney General cautioned that “good behaviour could not be legislated”.

“There has to be cultural buy-in, so we need to look to see where there are weaknesses; we need to look at the family structure,” Mr. Brathwaite emphasised, pointing out that children learnt from the households in which they grew up.

Ms. Perceval acknowledged that there were challenges, but noted Barbados was doing well in its efforts to protect its children, having undertaken a process of legal reform and placed the Convention on the Rights of the Child at the centre of attention.

The Regional Director also noted that new country programmes for Barbados and the Eastern Caribbean would be presented in New York soon, with emphasis being placed on integration, social inclusion and child protection.