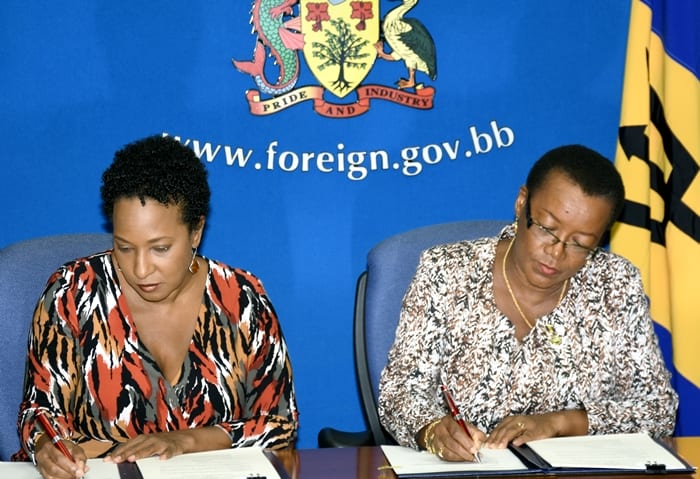 Senator McClean stated that she was very pleased that after 20 years, both parties had finally signed an official agreement “formally documenting the facilitation efforts”.

“I am happy to say that the Government of Barbados was able to offer to the agency the high level of support that we have deemed appropriate for our regional and international partners.

“Caribbean Export was established in November 1996 and since then, it has been, and still is, the only regional trade and investment promotion agency in the African, Caribbean and Pacific Group, and that is an important indicator of its significance and value,” she shared.

The Minister noted that there was a long partnership between the agency, the country and the region, and it was a “shining example” of the CARICOM, CARIFORUM and the European Union partnership.

Mrs. Coke-Hamilton said that her agency was pleased to formalise its position, and looked forward to continuing to support the Government of Barbados and its private sector.

She said that to date, Caribbean Export has assisted over 500 beneficiaries from Barbados with work programme-based initiatives, and subsequently, has spent over $1.8 million supporting private sector development on the island.

The Executive Director thanked Senator McClean for her continued support over the years and expressed the hope that Barbados would continue to move in a direction that “promotes a strong and vibrant private sector”.