Agriculture Key To A Nation’s Development 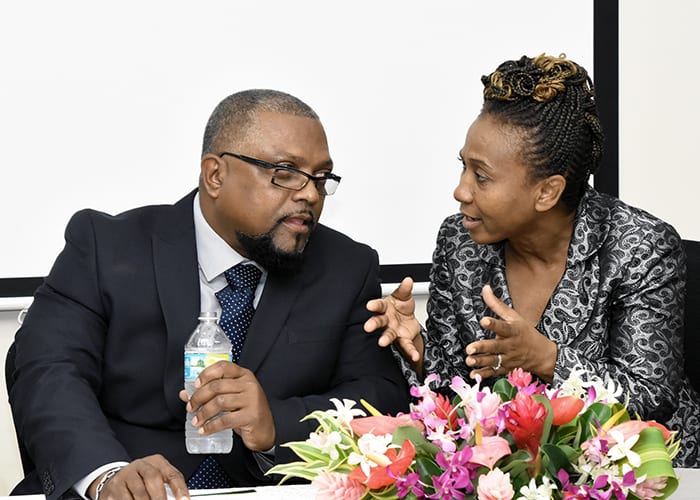 Minister of Agriculture and Food Security, Indar Weir in discussion with Permanent Secretary in the Ministry, Janet Phillips at today’s Accountability Seminar hosted by the Inter-American Institute for Cooperation on Agriculture. (A.Gaskin/BGIS)

Agriculture plays a key role in the development and prosperity of a country by helping to alleviate poverty and achieve food security.

This view was shared by Minister of Agriculture and Food Security, Indar Weir, as he addressed an Accountability Seminar hosted by the Inter-American Institute for Cooperation on Agriculture (IICA) today at his Ministry in Graeme Hall.

Mr. Weir stated that food security, as defined by the Committee on World Food Security in 2012, was a situation “when all people, at all times, have physical, social and economic access to sufficient safe and nutritious food that meets their dietary needs and food preferences for an active and healthy life”.

To this end, he said he wanted to ensure that the Ministry’s efforts, as well as those of stakeholders, were “coordinated, clear and collaborative”, so that ultimately, food security could be successfully obtained.

The Agriculture Minister noted that it was suggested that agriculture had become part of the problem of global warming through the use of fertilisers, ruminant digestion, fuel use and land clearing for agriculture.

“There is therefore the view that we in the agricultural sector must be part of the solution to climate change by adopting practices that are ‘climate smart’, that is, agriculture that sustainably increases productivity and resilience to environmental pressures, while finding ways to reduce its environmental impact by lowering its own greenhouse gas emissions without compromising food security,” he suggested.

Mr. Weir thanked IICA for its “sterling” work in partnering with his Ministry and other stakeholders in contributing to Barbados’ rural sectors for the past forty years.

“IICA’s mission in those early years remains relevant today, as it continues to respond to the new demands of the agricultural sector in Barbados. Its presence over the last two decades has been marked by a strong emphasis on strengthening national and regional agricultural health and food safety systems; promoting the involvement of youth in agribusiness with National Vocational Qualification training and certification; hosting of an annual Youth Farm Summer Programme since 2012; supporting value chain development for the iconic Barbados Blackbelly Sheep; Agro-tourism linkages and more recently, introducing innovation and technology for sustainable and climate smart agriculture,” he outlined.

The Accountability Seminar is held annually as part of IICA’s mission to encourage, promote and support member states in their individual efforts to achieve agricultural development and rural well-being.

During the seminar, the agency meets and engages with stakeholders within the agricultural sector to report and update them on some of the results of their technical cooperation activities.