All On Stream For Civic Centre

If all goes well, the Civic Centre being constructed in Cane Garden, St. Thomas, should be completed by the end of September this year.

That is according to Director of the National Insurance Department, Ian Carrington, who gave the assurance that despite one variation with regards to excavation, the project was on time and within budget.

He was speaking to reporters following a site visit to the Centre, which will house a two-storey police station and a Magistrate’s Court at a cost of approximately BDS $16 million.

The construction is part of a five-year, $76 million, Citizens Security Facilities Project being funded by the National Insurance Department.

Mr. Carrington stated that he was pleased with the quality and level of workmanship seen at the site, and described the project as an important one for the country, “as citizen security is paramount if we want to live in a safe and secure place”. 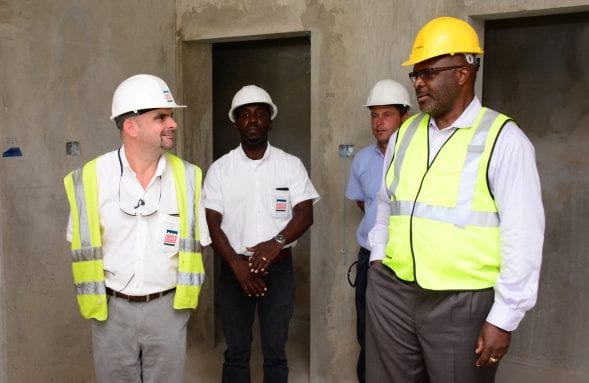 Registrar of the Supreme Court, Barbara Cooke-Alleyne, who was part of the touring party that included Attorney General and Minister of Home Affairs, Adriel Brathwaite, members of the Royal Barbados Police Force and other technocrats, said that she too was pleased with the progress being made.

“We are all thrilled with the speed and progress being made on the building as this is a necessity for us and the police, …so that St. Thomas is well serviced. It is good to hear that it is on budget and on time …and, with this new building, we expect technology to be at its best.”

Also visited were the Central Police Station, where the old male barracks are being refurbished, and the Hastings site, which will house an amalgamated Hastings and Worthing Police Stations.