If everything goes as scheduled, Barbados should have an amended Physical Development Plan (PDP) by year-end.

This disclosure has come from Chief Town Planner, Mark Cummins, who said a few more steps would now have to be taken before the document was completed. H

e explained, for example, that the salient points obtained from the public at the recently concluded community meetings would have to be included in the draft final plan, which will be submitted to him by early May.

“The law requires the Chief Town Planner to submit that plan to the Minister responsible for Town Planning, who is the Prime Minister, and I intend to submit it by mid-June… We are hopeful that this plan will come into operation on or before the 31st of December.

“But the important thing is that the law allows for a plan in preparation to be used as part of the decision-making process. So, as we speak, we have started using the policies in this plan as we determine applications which have been submitted under the development control process; and that’s a very good thing, because what happens is that it allows for a very smooth transition from one plan to the amended plan,” Mr. Cummins indicated.

Historic Bridgetown and its Garrison. (FP)

Emphasising its importance, he pointed out that a number of things had changed since the amendment to the 2003 Plan, and highlighted the inscription of Historic Bridgetown and its Garrison on the UNESCO World Heritage List in 2011 as one such major change.

He said he was “very pleased” with the work of the consultants on that section of the plan. “I think we have a number of exciting policies which would allow for contemporary development, but we would still be able to enjoy the beauty of our historic City and our Garrison,” he stated.

He explained that the draft amended plan focused a lot more on climate change, the green economy and community plans, which contain specific details relating to the development of those areas.

“The community plans set out specific urban design guidelines and regulatory functions, which would allow the communities to develop. So, I do think that this proposed amendment builds on and enhances what would have been done in 2003,” he said.

He pointed out that the majority of land within the St. David’s to Six Cross Roads corridor had been retained for agricultural development because the area was flat and readily lent itself to mechanisation.

The Chief Town Planner added that provisions for the new secondary school at Searles was included in that community plan, as well as a significant residential development at the Ridge, where approximately 750 houses would be built.

Turning his attention to the Warrens area, he noted that it had grown rapidly and identified the construction of two Government buildings, as contributing to the increase of people in that space. 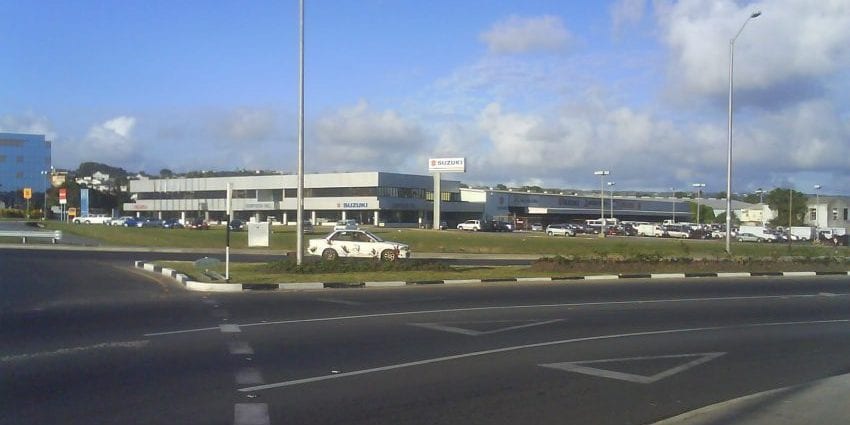 Mr. Cummins cited the the construction of two Government buildings in Warrens as contributing to the increase of people in that space. (Photo credit: commons.wikimedia.org)

“The challenge with Warrens is that the walkability is poor, so to get from the northern side to the southern side, persons feel a lot more comfortable getting into a car, which then leads to the congestion….

“So, what we have done is looked at the possibility of walking corridors, whereby persons can walk from the north to the south side and vice versa, especially during the working hours when the number of persons in Warrens is at the highest level,” he explained.

Mr. Cummins disclosed that his department was working very closely with the Ministry of Transport and Works, which is the implementing agency, to develop a high occupancy vehicle lane from Wildey to Warrens during the morning and afternoon peak periods.

According to him, persons would be able to park their vehicles at the Garfield Sobers Gymnasium and public transportation would then move them from Wildey to Warrens. Depending on its success, he said, the route might even be expanded to include the University of the West Indies.

The Chief Town Planner added that when a decision was made on how many travelling in a car would qualify for the high occupancy vehicle, then private vehicle owners would be allowed to use it.

“We think that will move a lot more people faster and one of the objectives of the plan is to move people,” he stressed.

[x_pullquote cite=”Chief Town Planner, Mark Cummins” type=”left”]We are hoping that we can introduce a water taxi service from Oistins to Bridgetown. If we are not able to use the existing jetty infrastructure, we do hope that some adaptation can be made to it, which is not very costly….[/x_pullquote]Mr. Cummins said that one of the main plans for Oistins was the relocation of the bus terminal from the seaward side to a site on the landward side, east of Granny’s Car Park.

“We have also identified Oistins as one of the park and ride locations where persons can drive to, leave their vehicles near Granny’s Car Park and then take public transport into Bridgetown.

“We are hoping that we can introduce a water taxi service from Oistins to Bridgetown. If we are not able to use the existing jetty infrastructure, we do hope that some adaptation can be made to it, which is not very costly… One of the major things to facilitate that [water taxi service] would be a passenger terminal, which we are hoping can be a public-private arrangement….,” he noted.

The jetty at Speighstown. (Stock Photo)

He added that they were excited by the prospects of Oistins since a number of things could be done there without large sums of money, and he identified the relocation of bus stops to ease traffic congestion as one such mechanism.

“We also want to improve the pedestrian footpath at Oistins given the number of persons who utilise this space, especially on Thursdays, Fridays and Saturdays…. There was a suggestion from the audience … that we should expand the Oistins Community Plan area to include some of the foundation neighbourhoods such as Ashby Land and Scarborough.

“That suggestion is something we will definitely take back and discuss, and if necessary, ensure it is put in place because we would want those foundation neighbourhoods to benefit in the event that area becomes a special development area and there are economic benefits to be gained,” he said.

Within recent years, significant research has been done in a number of areas and Mr. Cummins said the amended plan has benefited tremendously from these invaluable studies.  He proffered the view that these documents had assisted in preparing “an outstanding” amendment plan.

[x_pullquote type=”left”]The draft Physical Amended Development Plan will focus more on climate change, the green economy and community plans, which contain specific details relating to the development of those areas.[/x_pullquote]The Chief Town Planner added that they teamed up with the medical fraternity to address the major challenge of chronic non-communicable diseases in Barbados.

He explained that by focusing on accessibility and mobility, they had been able to capture a number of factors that would seek to improve the overall health of citizens and also make better use of public spaces.

With the extensive work done by the consultants and the invaluable input of the public, Barbadians should be excited about this amendment to the Physical Development Plan, which outlines innovative ways to improve our homeland, thus benefiting the country and its people.