Amendments On The Cards For Constitution 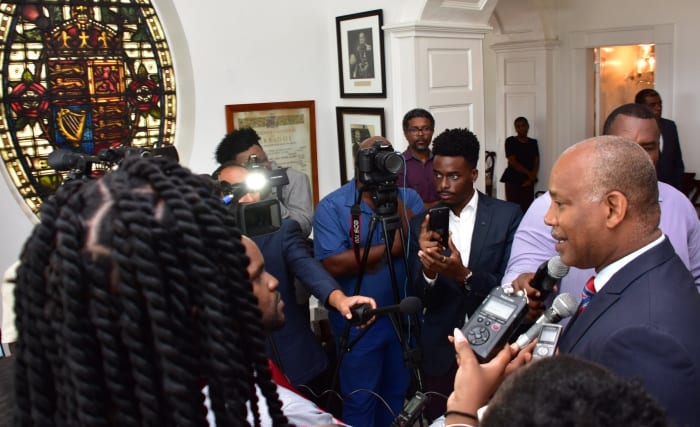 Attorney General and Minister of Legal Affairs, Dale Marshall, speaking to reporters during a press conference following the swearing in of 10 out 12 Senators at Government House this morning. (C.Pitt/BGIS)

One of the first orders of business when Parliament meets next week will be to amend aspects of the Barbados Constitution to allow citizens not resident here to be sworn in as Senators.

Attorney General and Minister of Legal Affairs, Dale Marshall, flagged the issue during a press conference following the swearing in of 10 of the 12 Government Senators at Government House this morning.

Mr. Marshall explained that Senators-designate Rawdon Adams and Kay McConney were absent from today’s swearing-in because Barbados’ 1966 Constitution stipulates that a Senator must be an ordinary resident in the country for 12 consecutive months before being appointed.

He pointed out that Mr. Adams was the son of late Prime Minister, Tom Adams, and was resident in Barbados after relocating here almost 12 months ago, while Ms. McConney currently resided in Canada, and had to resume residence in Barbados.

“This means that we will have to make a Constitutional amendment to provide that in order to be qualified to be appointed to be a Senator you have to be a citizen, which we think is more appropriate than being ordinary resident,” Mr. Marshall stated.

He added that Barbados existed in a very global community, with Barbadians serving with great distinction across the diaspora and other parts of the world. “Therefore, it is important for us to make this amendment so … all individuals who have a contribution to make to Barbados to do so,” he said.

The Attorney General revealed that the amendment was expected to be made on Tuesday, June 5, when Parliament officially opens with the delivery of the Throne Speech by Governor General, Dame Sandra Mason.

He continued: “Parliament will adjourn until 3:00 p.m. to facilitate that amendment. The other issue, which will also take place on Tuesday evening, will be the matter of the amendment to the Constitution to permit the Governor General to make appointments of Senators in the way in which the Prime Minister indicated that she would want the Governor General to be able to do.”

Mr. Marshall noted that there was some disagreement between the legal luminaries as to what the Constitution truly provided, and reasoned that it was unsafe to proceed on the basis of the Constitution as it was presently set out.

“We would want to make a specific constitutional provision to allow the Governor General to make appointments to the Senate in these circumstances, so that there would be a representative of the political party that would have achieved the most number of votes at the polls,” he explained.

He added that after the amendment to the Constitution, the other two Senator-designates would be sworn in and the Senate expected to meet in its full complement on Wednesday, June 6.