Another Honour For Dame Sandra Mason 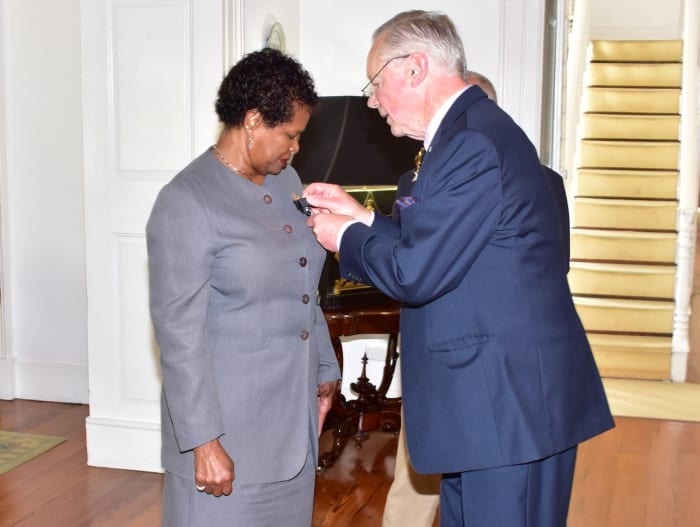 Lord Prior, Sir Malcolm Ross, pinning the insignia of the Order of St. John on Governor General, Dame Sandra Mason, during an investiture ceremony at Government House yesterday. (C.Pitt/BGIS)

Governor General of Barbados, Dame Sandra Mason, received the insignia of the Order of St. John during an investiture ceremony at Government House on Tuesday.

The ceremony was conducted by Lord Prior, Sir Malcolm Ross, who explained that the Governor General would hold the second highest position within the Order, as a “Dame of Grace”.

Sir Malcolm told the media following the ceremony that it was “an honour” and a “privilege” to present Dame Sandra with two badges reflective of her position as the President of the St. John Ambulance Association of Barbados.

The Order of St. John, formally known as the Most Venerable Order of the Hospital of St. John, is an Order of Chivalry of the British Crown.  Her Majesty, The Queen, the Sovereign Head of the Order, honours individuals who have made outstanding contributions to the work of St John, by awarding membership, at different grades, in the Order.