Another School To Have A Sixth Form 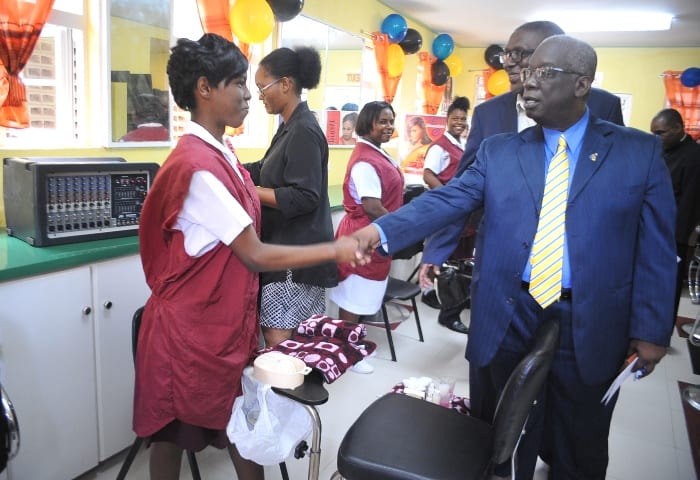 Education Minister, Ronald Jones greets one of the cosmetology students at the opening of a new lab at the Grantley Adam Memorial School. Looking on is Parliamentary Secretary in the Ministry of Education, Senator Harry Husbands. (A.Miller/BGIS)

The Grantley Adams Memorial School has been added to the list of schools earmarked to have sixth forms next year.

This news came from Minister of Education, Science, Technology and Innovation, Ronald Jones, today, as he addressed the unveiling ceremony for a new Cosmetology Laboratory at the school in St. Joseph.

Referring to the list of secondary school to receive sixth forms in September 2017, Mr. Jones assured the staff and students:  “I will add you to that list.”

The Education Minister stated that while there was a need to have a variety of post-secondary options for young students, revenue challenges were the main hindrance to the implementation of such a venture.

Mr. Jones encouraged the school to move forward with the necessary research and proposals, but however cautioned that there were some considerations to be made when taking such a huge step.

“It is not simple, but it is doable… There is no guarantee…, it’s an involved process,” he said, noting that the school needed to be in “a position of readiness”.

The Education Minister also praised the notion that the school’s proposed sixth form would focus on technical and vocational studies.

The Cosmetology Laboratory was made possible through a partnership with Eldorado Gold (Barbados) Ltd.