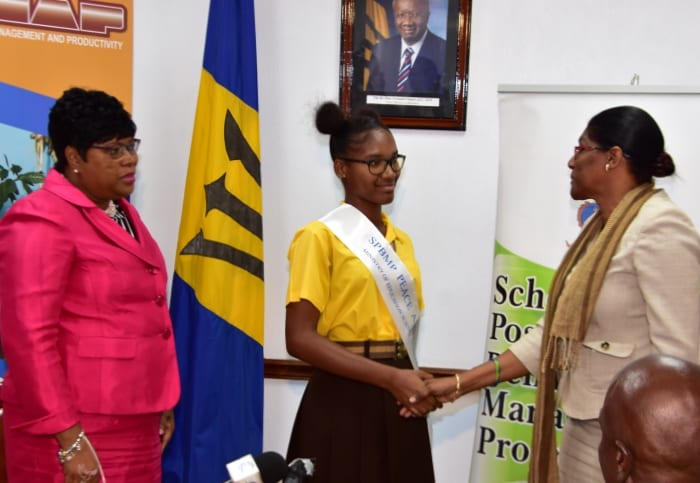 Walking away from conflict has its rewards.

Princess Margaret Secondary School student, Ayra Newton, is proof of this after she was designated the first Peace Ambassador in the Ministry of Education, Science, Technology and Innovation’s anti-violence campaign, during a brief ceremony yesterday. She officially holds the title of Schools’ Positive Behaviour Management Programme (SPBMP) Peace Ambassador.

Ayra became a household name in Barbados and abroad after a March 19 video surfaced on social media showing the Fourth Form student maintaining her resolve while being bullied and physically assaulted by a student from another school, as she waited for a bus to take her home. Since the incident, the teenager has been showered with praise and accolades including her most important to date, the SPBMP Peace Ambassador.

Chief Education Officer, Karen Best, congratulated Ayra on her self-control and her newest role. She also commended the student’s parents and the work of the Juvenile Liaison Scheme.

“Here in the Ministry, we have a programme that is in both the primary and secondary schools, the Schools Positive Behaviour Management Programme. Ayra epitomises everything that we have been saying and trying to do in this progrmame.

“When I saw the video, I watched it over and over again. And, I said to Ms. Reid, who is responsible for the Schools Positive Behaviour Management Programme, that we are about to roll out an anti-violence campaign and we are looking for peace ambassadors, and Ayra selected herself by her not responding to that situation. She is now going to be the Ministry’s first Peace Ambassador,” Mrs. Best stated.

Permanent Secretary in the Ministry of Education, June Chandler, said she not only respected the Princess Margaret Secondary School student but knew she would be a successful Peace Ambassador. She added that Ayra was a success story and lauded the Juvenile Liaison Scheme, which the teenager attended when she was in Second Form, for its work with delinquent students.

Ms. Chandler pointed out that while some questioned the success of Government initiatives like the scheme, Ayra was “living proof” that they did work. “What we may be having out there in terms of violence is not indicative of the entire school system. We have the Ayras in this world who would represent the school system,” she emphasised. 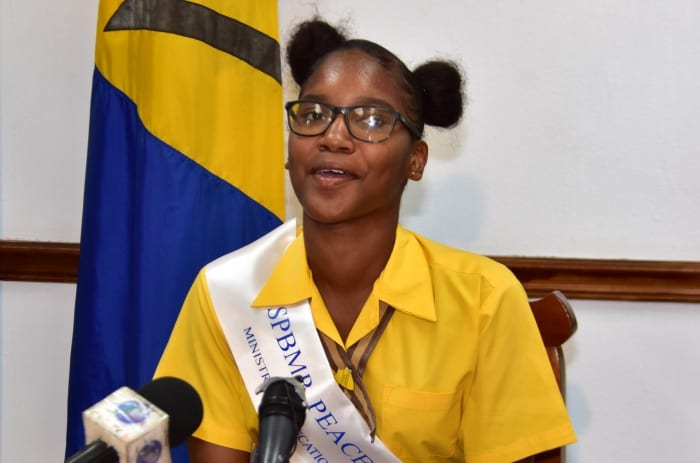 Roz’Marie Ward-Waterman, a police officer with the Juvenile Liaison Scheme who worked with Arya, said the Scheme had an 80 per cent success rate. She explained that most of the police officers attached to the scheme were either qualified in social work or psychology.

Ayra graciously accepted her new role, and said she realised the responsibilities that it carried. “Thank you for this honour. I am speechless right now because I didn’t know it would go this far. I want to thank my parents, my [juvenile] officer and my Principal for bringing me a long way. As a Peace Ambassador, I now have to set examples for younger people and elderly people too. I have to carry myself [well],” she said to applause.

The Fourth-former also received a scholarship from the Barbados Institute of Management and Productivity to pursue a course in any area of Management after completing secondary school. The course is valued at $2,500.

Senior Education Officer and coordinator of the Ministry’s SPBMP programme, Janice Reid, told those in attendance that the title of Peace Ambassador would be conferred on students from primary, secondary and tertiary institutions who demonstrated the attributes and characteristics of a peace ambassador.

“Those who can walk away from [volatile] situations they are in and those who give ideas or help those persons who are in those situations will receive the title,” she explained.

The Ministry of Education is expected to roll out its anti-violence campaign in coming weeks.