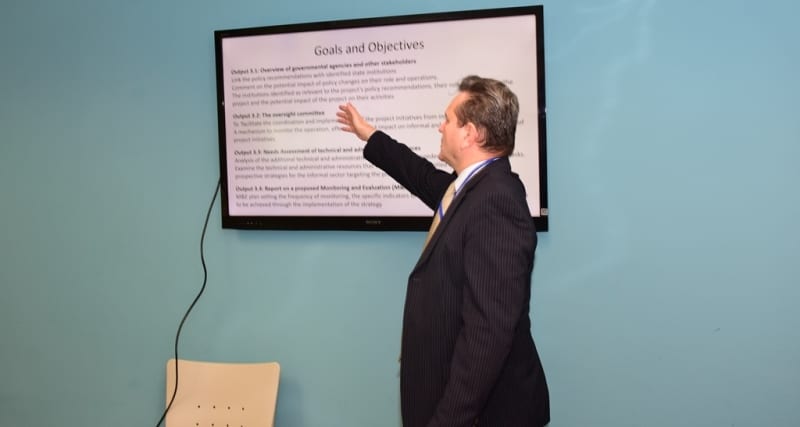 Presenter, Neil Dourmashkin discussing the institutional set up for dealing with the informal economy. (C.Pitt/BGIS)

A comprehensive economic assessment of Barbados’ informal economy is currently being undertaken to examine how the sector could be modernised.

This disclosure came recently from Director of Research and Planning in the Economic Affairs Division, Patrick McCaskie, as he delivered remarks at a half-day workshop entitled:  Domestic Resource Mobilisation Programme on Modernising the Informal Economy in Barbados.

Mr. McCaskie told his audience: “The results of the study would assist Government in determining a more tailored and discrete set of strategies to implement within the informal sector and to explore the economic potential of additional revenue to achieve greater fiscal efficiency, alleviate the budget deficit and spread the burden of taxation across the economic agents more equitably, based on the ability to pay and benefit principles.”

He disclosed that the recommendations from the consultancy would be critically assessed, then forwarded to the Minister of Finance for his review, and finally, sent to Cabinet for consideration.

He said that through the consultancy Government would, over the medium-term, seek to strengthen the foundation for sustainable economic growth, while providing a better structured enabling environment for an improved Domestic Revenue Mobilisation framework in Barbados.

Describing the study as “timely”, Mr. McCaskie stated that evidence-based research confirms that in most developing countries across the globe, informal firms (those that are not registered with the Government) account for about a quarter to a half of all economic activity.

“These informal firms, by evading and avoiding taxes and regulations, unfairly compete with the more efficient formal firms and, by taking away their market share, undermine economic growth and progress,” he explained.

He expressed the view that despite the magnitude of the unofficial activity of informal firms, little was understood about their role in the process of economic development, and about how important making them official would be to economic growth.

The Director opined that reducing informality in the Barbadian economy would be rewarded with rapid increases in productivity, economic growth, employment generation and export led-foreign exchange earning capacity. He noted that previous empirical evidence suggests that Barbados’ informal economy was considered relatively large. 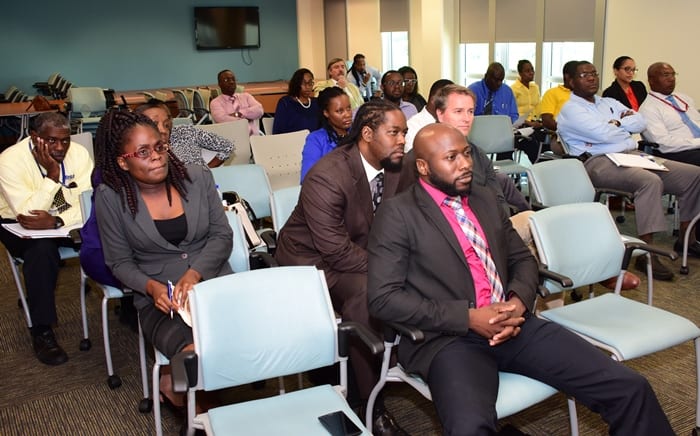 Participants listening attentively during one of the presentations on the informal economy. (C.Pitt/BGIS)

Acting Senior Economist Cyril Gill agreed, saying it is believed that the informal economy accounts for between 30 and 36 per cent of Barbados’ official GDP.

Mr. Gill believes that Government must embark on creative ways to strengthen its revenue intake, while seeking to expand its resource base in a sustainable manner over the medium to long term. “Without such, the proverbial deficiencies in financing development will continue to plague the operations of the Government,” he pointed out.

As Barbados proceeds on this Domestic Resource Mobilisation initiative, which is made possible through grant funding from the European Union Delegation, the Senior Economist reported that new and underutilised revenue resources might be realised, thereby leading to a critical financing fillip for education, health care, and infrastructural and poverty alleviation initiatives.

During the half-day workshop, the consultants presented their initial findings to a group of stakeholders.  After receiving feedback, they will make further adjustments in order to streamline recommendations. The final document will be taken to Cabinet for approval and a project steering committee is expected to be established to implement the suggestions.