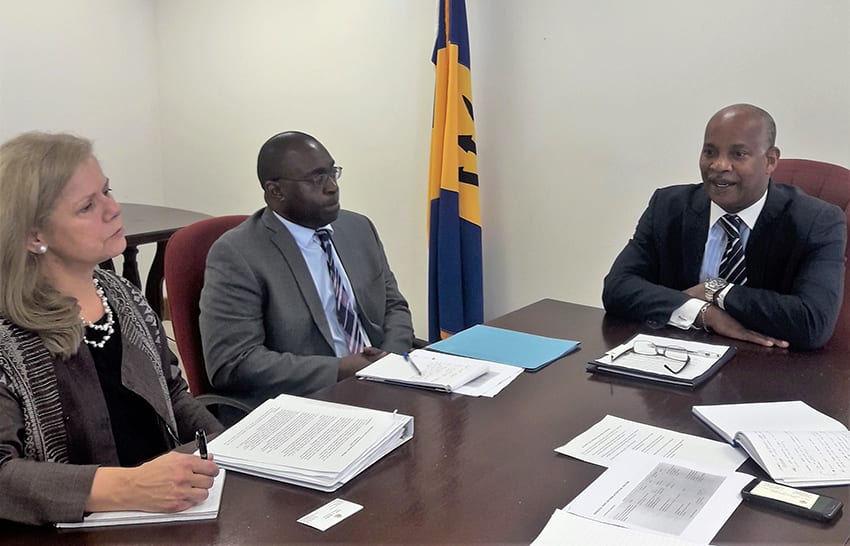 Attorney General and Minister of Legal Affairs, Dale Marshall in discussions with Representative of the Office to Monitor and Combat Trafficking in Persons, Shelly Westebbe, during a recent courtesy call. Also pictured (centre) is Counsellor of the US Embassy (Political and Economic Affairs), Shante J. Moore. (GP)

Government’s focus on the economy has led it to prioritizing a number of matters to the extent that some will have to be addressed a little later on.

This was made clear recently by Attorney General and Minister of Legal Affairs, Dale Marshall, during a courtesy call with representative of the Office to Monitor and Combat Trafficking in Persons within the United States (US) Department of State, Washington D.C., Shelly Westebbe.

During the meeting at Webster Business Park, Wildey, St. Michael, the two officials scrutinized Barbados’ efforts in combatting human trafficking over the years.

Mrs. Westebbe, whose aim was to report on the strategies and plans in place to address this crime, acknowledged that the US placed a “very high priority” on human trafficking, defining it as “exploitation by force, fraud or coercion for the purposes of forced labour, or commercial sex”.

She added that in the case of child trafficking, under the US law, they presumed “consent as irrelevant” and “trafficking” was presumed for children under 18.  Acknowledging that her department worked diligently with the US Embassy here to gather information provided by the Barbados Government, she said they sought to examine the latest information on anti-trafficking efforts, exchange ideas and learn lessons.

The US official, while noting that work would soon start on drafting the 2019 Trafficking in Persons Report, commended Barbados for having done “some wonderful things” and explained how the island stood at Tier Two and could continue along that route.

“Barbados has one of the strongest Tier rankings – it’s Tier Two –  and that’s where a country is very close to achieving the minimum standards and has the ability to do more,” she said.

The Attorney General, when questioned about progress towards amending anti-trafficking laws, training judicial staffers and dealing with court matters involving human trafficking, said: “I think there is always the challenge of being a new Government in difficult times. Our priority has been to try and grapple with our country’s financial situation and we are making good strides in that and, therefore, once that debt restructuring and financial repositioning of the country is put in place, then I think we would be able to devote more of our attention to some of these other issues.”

The Attorney General welcomed the availability of training opportunities for judicial personnel, noting that with additional judges being brought on in the coming months there would be opportunities to introduce new members of the judiciary to such courses.

He further acknowledged that attention was also now on the backlog of cases in the court system, and in the interest of national security and safety, it was important to address these first.