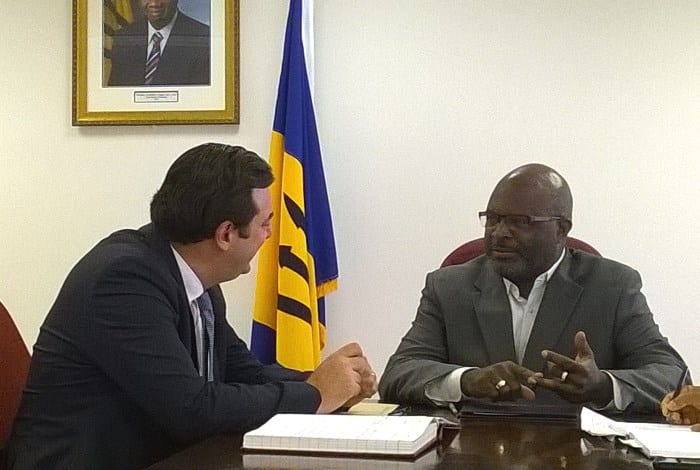 An audit of the structure of the Royal Barbados Police Force (RBPF) and training to assist with the rehabilitation of prisoners committed for sexual offences are two priority areas now occupying the attention of Attorney General, Adriel Brathwaite.

Mr. Brathwaite raised these and other issues during a recent courtesy call from Head of the Caribbean, Central America and Mexico Department of the United Kingdom’s (UK) Foreign and Commonwealth Office, Alan Gogbashian.

The Attorney General said he wanted the structure of the RBPF audited to ensure that the correct staffing and expertise were in place.

He explained that his vision was for career plans to be done for new entrants to the Force, and for systems to be implemented to offer assistance to officers in need.

Stating that there was also a need to expand the Force’s Training Division, Mr. Brathwaite said that additional training was required to assist in rehabilitating inmates committed for sexual offences. He expressed the concern that enough was not being done in this regard, which could lead to recidivism.

Criminal justice reform; ways of addressing the backlog of cases presently in the court system; and issues relating to terrorism were also addressed during the visit. Mr. Gogbashian promised the Attorney General that he would discuss the issues further and keep in contact with his office.

He told Mr. Brathwaite that although the UK was going through transitions in its government following the Brexit referendum, it remained committed to the Caribbean. “I wish to reassure the region that the UK is as committed as ever. We continue to see the Caribbean as a strong partner,” he affirmed.