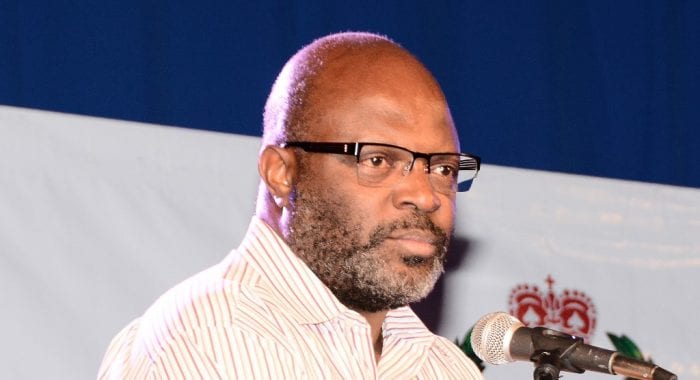 Attorney General, Adriel Brathwaite, has made an impassioned plea for young people to stop and think about their families before engaging in a life of crime.

As he addressed the Prison Fellowship of Barbados’ Angel Tree 2016 launch at the Grand Salle, Central Bank of Barbados on Saturday, Mr. Brathwaite lamented that families, in particular mothers, grandmothers and children, were left to suffer because of the actions of others.

“They really need to stop, think and reflect – Do I want to cause this pain to my mother, to my grandmother, to my family?  Do I want my son and my daughter to have to take the bus up to Dodds to visit me?” the Minister said.

Mr. Brathwaite stressed that there was a need to persuade more young people to stay away from activities that brought them in contact with the criminal justice system.

However, he cautioned that the growing aggression among young women in Barbados, where they were now smoking “spliffs”,  drinking rum and cursing at events, such as football matches, was not a good sign for the country and needed to be addressed urgently.

“Who is going to save our children if the mothers to be and the mothers are not the ones setting the examples? That concerns me tremendously,” Mr. Brathwaite said.

The Minister questioned what had changed in Barbados to the point that young women were now attracted to the “roughest of the rough”. I don’t understand [how] bad behavior is seen as a plus; [or] that not bathing often is seen as a plus,” he remarked.

He suggested, however, that the change in behaviour could be linked to a breakdown in the island’s value systems, where basic things such as prayers on mornings at schools and the singing of hymns were no longer done.

“Now you have children telling you, and their parents are supporting them, that they are not attending worship on mornings,” he said.

However, he maintained that the onus was on the older generation to find other ways of teaching children values, such as what is right from wrong.

The Minister then advised churches and church leaders to go beyond preaching from the pulpit on Sunday mornings and open air meetings, and take their services into the homes of persons in “challenged” communities.

“Do more house to house… There is still more room for us to go into communities and try to save more of our young people,” he stated.

He suggested that we should return to the tradition of being good neighbours. “We need to go back to the things that made Barbados this great nation. We, who are old fashioned, need to stand up and accept that our way is the better way; that our way is the true way to save the country and our young people.

“Crime doesn’t see blue or red, “B” or “D”.  This is an issue that all of us, as a country, need to stand up and get up and save more of our young people,” the Attorney General stressed.