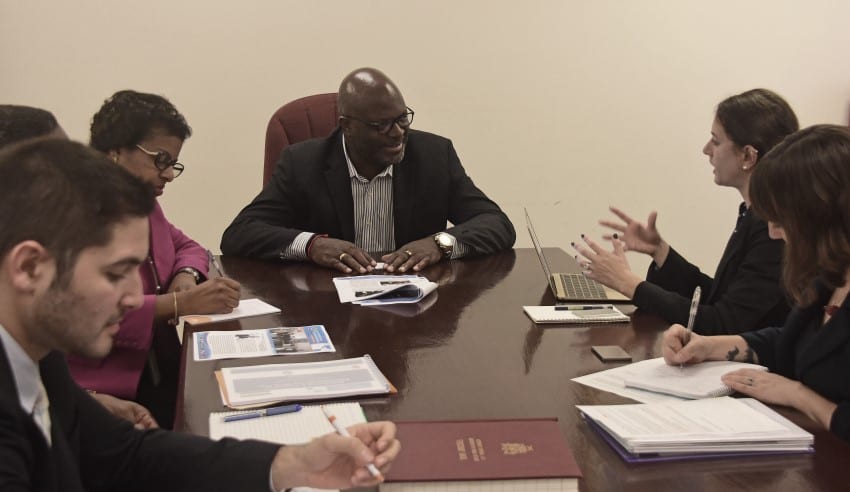 Attorney General, Adriel Brathwaite, (centre) engaged in discussions with Deputy Director of the Treatment Programme at the CCI, Annie Schachar, (right) as Permanent Secretary in the Office of the Attorney General, Yvette Goddard (left) makes notes, while other members of the delegation look on. (C.Pitt/BGIS)

With the Drug Treatment Court (DTC) up and running in Barbados, Attorney General, Adriel Brathwaite, has shared his vision for a problem-solving court model to be spread across the island.

He said these courts could focus on commercial and family matters, as well as on persons with mental health issues. “At least a third of the people in prison could do with psychiatric and psychological intervention,” he reasoned.

The Attorney General shared his vision during a courtesy call from Country Representative to the Organisation of American States (OAS), Ambassador Francis McBarnett; Project Assistant with the OAS and the Inter-American Drug Abuse Control Commission (CICAD), Luis Suarez; Deputy Director of the Treatment Project at the Centre for Court Innovation (CCI), Annie Schachar; and Associate Director of Research at the CCI, Amanda Cissner, at his Wildey, St. Michael office on Thursday. Permanent Secretary in the Office of the Attorney General, Yvette Goddard, was also in attendance.

Mr. Brathwaite said that there were a number of people suffering from mental illnesses, but because of the fear of being stigmatised were reluctant to seek attention for the issues they were facing.

In relation to the family court, Mr. Brathwaite noted that a different approach was needed to deal with family matters such as divorce and juveniles.

The Minister indicated that training assistance and guidance would be required to make such a vision possible.

Noting that gaps identified in the DTC, following an assessment, would be addressed, Mr. Brathwaite said there was a need for additional resources to support the model.

“Buy-in is not an issue.  Having the tools to support it on a continuous basis is where the challenge resides,” he stated.