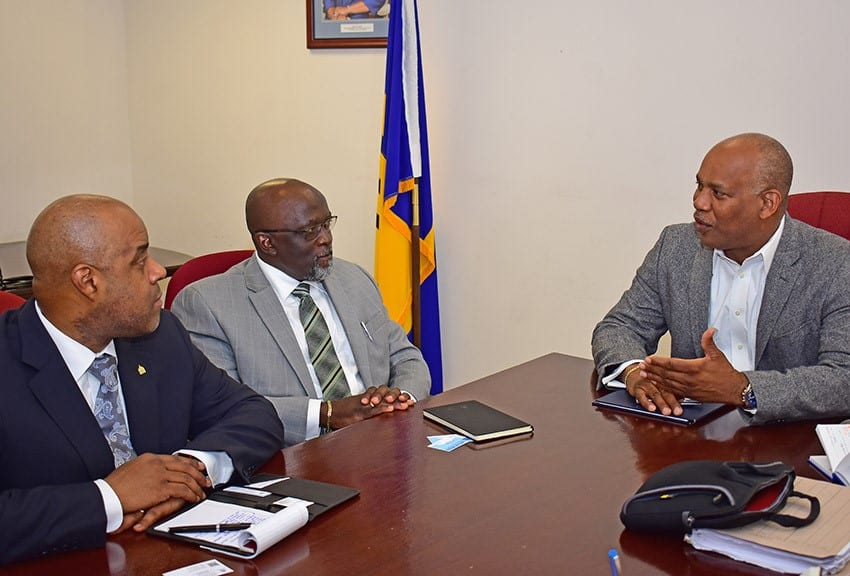 Attorney General, Dale Marshall, making a point to Head of the Coordination Desk for the Americas of the Interpol General Secretariat, John Duncan (left) and Acting Executive Director of CARICOM IMPACS, Michael Jones, during a recent courtesy call. (C.Pitt/BGIS)

Attorney General and Minister of Legal Affairs, Dale Marshall, has welcomed the establishment of an Interpol Caribbean Office in Barbados.

“I am delighted the Caribbean sub-region will now have your presence. The Caribbean always gets lumped with the larger grouping and our issues become overshadowed.  I am happy Interpol as an international agency has recognized that we have peculiar needs,” he said.

He made these comments during a recent courtesy call with Head of the Coordination Desk for the Americas of the Interpol General Secretariat, John Duncan and Assistant Director for Security and General Services, Veronique Bruet; Acting Executive Director of CARICOM IMPACS, Michael Jones; and its Acting Director, Tonya Ayow and Permanent Secretary in the Ministry, Yvette Goddard.

The Minister said that each Caribbean sub-region had its own individual dynamics, and identified the present firearms situation as one which Barbados was grappling with.

Noting that Barbados was in a position where it was challenged with issues related to border protection, Mr. Marshall said the island was concerned about its ability to trace weapons and people.

“We need a regional approach in that regard,” he said, stressing that it was good to have another layer of expertise on board.

He further noted that a lot of the challenges faced by Barbados were replicated across other CARICOM countries. “We need to lean on each other’s strengths.  I, therefore, look forward to working and collaborating with IMPACS,” he said.

Mr. Jones explained that the 7th General Assembly of Interpol granted permission to establish a Caribbean office to provide direct access to the National Central Bureaus in the Caribbean, and to facilitate a closer alliance with CARICOM IMPACS and Interpol.

He said the office, which was expected to be in place between June and July this year, would initially be established with three persons, and would focus on three priority areas – guns, cybercrime, and the trafficking and smuggling of people.