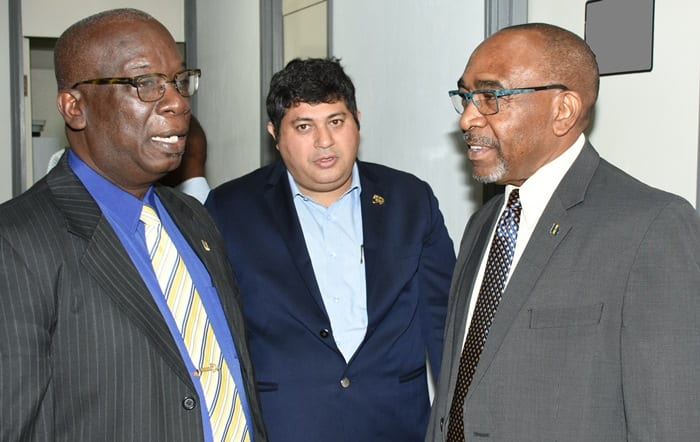 Education Minister Ronald Jones has dispelled any notion that the American University of Barbados (AUB), School of Medicine, here since 2011, is not moving in the direction of accreditation.

Addressing a press conference at the AUB’s Wildey headquarters yesterday,  he said, “This AUB, just like all others, first must be registered as a tertiary provider of education, by the Barbados Accreditation Council (BAC), which is the statutory body for the registration. AUB is fully registered by BAC and they have all of the various notations with all of the other bodies of any significance, World Health Organization, for example.”

The Education Minister noted that this was not only for the purpose of accreditation but to be recognised as providers of medical educators on the island. He added that they were progressing towards accreditation.

He however acknowledged that the BAC did not accredit medical schools in Barbados but this fell to the Caribbean Accreditation Authority for Education in Medicine and Other Health Professions (CAAM-HP) – the accrediting body for medical institutions in Barbados.

“They would work along with the BAC to bring that accreditation and that process has started,” Mr. Jones pointed out, adding that they had met the eligibility requirements for institutional accreditation. He noted they were on to the next phase, the candidacy phase, the point where all the personnel move in to do whatever is necessary to meet full accreditation.

Stating that the AUB had fully committed itself to the process, he said he was pleased to write to both the AUB and the Ministry of Finance notifying them that they had so far satisfied all requirements as they move towards institutional accreditation.

However, the Education Minister emphasised that accreditation was a voluntary process and not a coercive one. He said people go through accreditation as a means of ensuring that the institution meets world standards.

“AUB generally has met all of those basic standards and I believe in a few years that they would be fully accredited to meet all of the demands but an institution can only start the accreditation process after its first cohort has graduated.  AUB would see their first cohort graduating in September of this year, he added.”

Offering his Ministry’s support to the AUB Mr. Jones pointed out that the purchase of the property at BET’s former home in Wildey, was a definitive commitment to excellence. He also disclosed that the campus would soon be constructing a 200-bed hospital as a further commitment to making it “the most sought-after medical school not only in the Caribbean but in the world”.