Minister of Education, Ronald Jones presents a copy of the document ‘Early Childhood Curriculum and Attainment Targets for 3 to 5 year-olds’ to his Bahamian counterpart, Jeffrey L. Lloyd while Parliamentary Secretary in the Ministry of Education, Senator Harry Husbands look on. (C.Pitt/BGIS)

The Government of the Bahamas is looking to pattern its nursery education system after the Barbados model.

Following a meeting with Minister of Education, Science, Technology and Innovation, Ronald Jones, at the Ministry’s Constitution Road, St. Michael headquarters on Tuesday, Bahamas’ Minister of Education, Jeffrey L. Lloyd, said he was impressed at how advanced Barbados was when it came to early childhood education. His comments came after Ministry officials made a presentation on the structure of local nursery education.

He, along with his acting Director of Education, Dr. Marcellus Taylor, are in Barbados for the inaugural session of the 20th Inter-American Conference of Ministers of Labour which starts on Thursday, December 5, at the Hilton Barbados, but used to opportunity to learn more about the education system here.

Minister Jones, who said Barbados’ system of nursery education was more advanced than that of the Bahamas, offered assistance to his Bahamian counterpart through the sharing of knowledge and expertise in that sector.

“Minister Lloyd is the new Minister of Education; he has been in that post for just about seven months so he is still learning some things and, in Barbados, we are always willing to share with our brothers and sisters and colleagues across the region. I would want to offer to Mr. Lloyd that if he needs any assistance, we have personnel that could come and offer any assistance necessary. It doesn’t make any sense building capacity and not sharing that capacity right across the region to bring everybody up to a higher standard,” Mr. Jones stated.

The Bahamian Minister explained that he was intrigued by Barbados’ education system for three-year-olds particularly because it was provided primarily through the public sector. He said the opposite situation obtained in the Bahamas where nursery education was mostly private sector-led. Mr. Lloyd pointed out that his Government was on a mission to aggressively reform the education system for that demographic.

“Where we are, is somewhat of an undeveloped position in our ability to supply education in the public sector for our three-year-olds and that is a matter of resources both in terms of the number of teachers, trained teachers and physical capacity. In the Bahamas, provision of early childhood education has been driven largely by the private sector and we expect that will continue. But we also know there is a need for the public sector or the State to provide this opportunity for our citizens.”

“So, we are on an aggressive path of capacitating our young people who are interested in coming into the teaching profession not only as teachers, as well as teachers’ aides but also to build out our physical capacity with the construction of new schools. We are now attaching prior preschools to our primary schools – a building programme that will be quite aggressive over the next several years,” the Bahamian Education Minister disclosed. 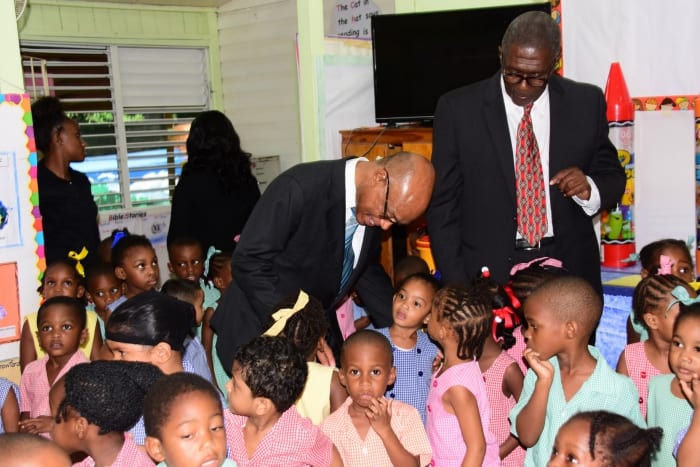 He said he was impressed with a number of the areas of the Barbados model during the presentation which was delivered by Senior Education Officer, (Nursery and Primary Schools), Christina Morris. These included the small teacher to student ratio in public nursery schools which stands at 1:15 compared to 1:25 in the Bahamas; continuous training of nursery teachers; continuous monitoring of private nursery schools; the fact that the Ministry oversees 50 nursery units in public primary schools as well as 12 nursery schools; the use of technology at that level; and the provision of a relatively free school meals service, provided to all nursery and primary school children. In the Bahamas, school meals are distributed based on the needs of the children.

Mr. Lloyd added, that while there was some financial challenge in implementing changes to the system in the Bahamas, his Government recognised there was an immediate need to make similar services available to Bahamians because of the demand that was being placed on his Ministry by parents, who realised the value of a preschool education. Currently, only 1,500 Bahamian children are enrolled in preschool which was only 20 per cent of children of preschool age.

“We know it is a necessity in terms of making available to our young people and our Bahamian society, the opportunities for a solid foundation for education – beginning at the earliest stages of human life. I am looking forward to our visits [to nursery schools here], and seeing how it is done, looking at some of the state-of-the-art facilities that have been constructed here in Barbados for the nursery students. We are looking forward to gleaning as much as we can so we can adapt and employ [what we learn] back in our home country,” he said.

Both Mr. Lloyd and Dr. Taylor were presented with copies of the Ministry of Education’s Early Childhood Curriculum and Attainment Targets for 3 to 5 year-olds, by Minister Jones.

He toured a number of nursery schools on Tuesday and Wednesday, including Erdiston Nursery School, Maria Holder Nursery Schools at Gall Hill, Christ Church and Oldbury, St. Philip, as well as All Saints and St. Boniface Nursery Schools.