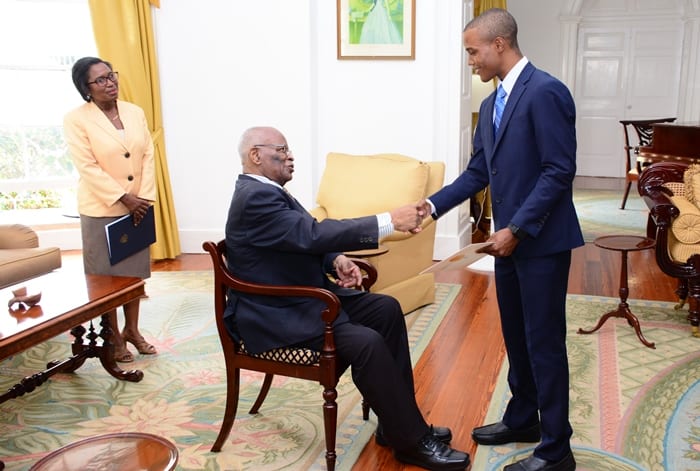 Twenty-one-year-old student, Johnathan Alleyne, is the recipient of the Royal Household Hospitality Scholarship 2017.

As a result, Mr. Alleyne, who is completing studies in Hospitality and Tourism Management at the University of the West Indies, will join the Master of the Household’s Department at Buckingham Palace and Windsor Castle for a six-week placement, culminating in Royal Ascot Week at Windsor Castle in June.

Sir Elliott congratulated the scholarship winner on being selected for the placement, and stated that it was his “pleasure and duty as the Queen’s representative” to present him with the stipend.

Describing the scholarship as “a fantastic opportunity”, Mr. Alleyne said he intended to use all of the training and education he gained in London. “I will try to put it to use not only in my daily life but in whatever posting I have at a hotel in future,” he added.

Mr. Alleyne will be assigned to the Front-of-House team of the Royal Household during the placement.

During his visit to the Caribbean in November last year, His Royal Highness Prince Henry of Wales announced that the Royal Household Hospitality Scholarship 2017 would offer nine hospitality placements – one each for Antigua and Barbuda, The Bahamas, Barbados, Belize, Grenada, Jamaica, St Kitts and Nevis, St Lucia, and St Vincent and the Grenadines – for Caribbean citizens to be trained at Buckingham Palace and Windsor Castle from May to June 2017.

The scholarship will offer its recipients an opportunity to work alongside the Master’s Department within the Royal Kitchens, the front-of-house and housekeeping sections to deliver a number of events.