Barbadians Encouraged To Assist The Elderly

Minister of Health and Wellness, Lieutenant Colonel Jeffrey Bostic, has called on Barbadians to make a contribution towards improving the care provided to senior citizens.

Lt. Col. Bostic made the call today during the official opening ceremony for the Geriatric Services National Appeal Day, at the St. Michael District Hospital grounds. The appeal is being made under the theme: Caring For Those Who Cared For Us: Returning the Favour.

The Minister told his audience: “Government alone cannot carry the full responsibility of ensuring the wellbeing of all its citizens, and there is a role for the general public to play. Today, the business sector, non-governmental organizations, faith-based organizations, schools and educational institutions and individuals are being given the opportunity to contribute to enhancing the care provided to our senior citizens.”

Acknowledging that his Ministry had an obligation to ensure that services provided to persons during the later stages of life were equitable to those enjoyed by the younger, healthier population, he said his Ministry would make every effort to ensure that the facilities were conducive to the continued delivery of excellent service.

Lt. Col. Bostic said geriatric healthcare services were being delivered in buildings that had not benefited from routine maintenance and as a result, the physical infrastructure of the St. Michael District Hospital and other institutions had deteriorated significantly.

He added that when his attention was drawn to the conditions at the Geriatric Hospital, he immediately solicited the assistance of the Chief of Staff of the Barbados Defence Force (BDF). He noted that an action plan for remedial work was designed by the BDF, to be carried out in partnership with the Geriatric Hospital and the Ministry of Health and Wellness. 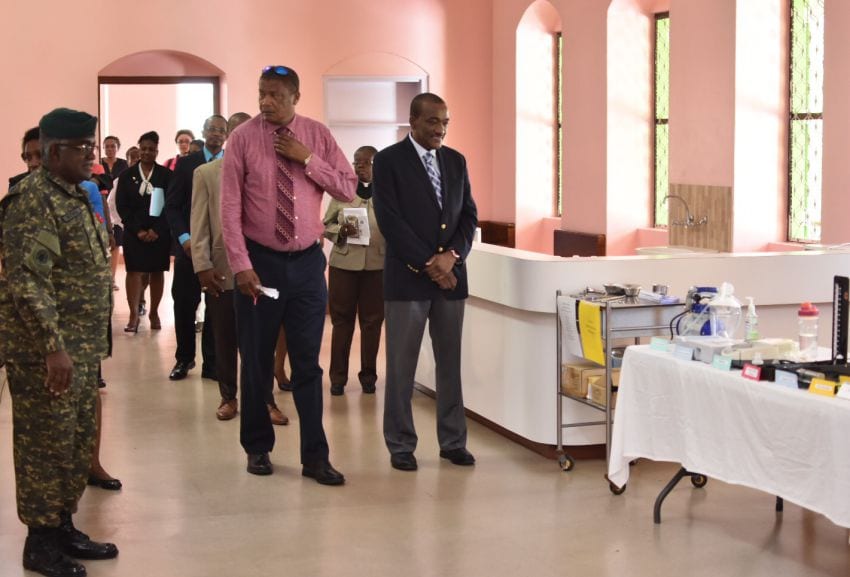 “The transformation that the buildings are undergoing is evident, with work now being completed on Phase 1 of the initial project…. What started out as a $31,000 project for the completion of this first of four phases for this block alone, has grown to approximately $155,000. It is now estimated that the cost for the complete refurbishment of the first block would be $510,000 and that a similar amount would be required for the second block,” he pointed out.

The Minister said he was pleased with the work, explaining that the roof structures had been repaired; ceiling tiles replaced; bathrooms and nurses’ stations had been refurbished; windows were refitted and installed; and internal and external walls had been repainted.

He said his Ministry would be innovative and think outside the box in finding resources to enhance the physical structures of the St. Philip, St. Lucy and Gordon Cummins district hospitals. According to him, an average of 504 patients received care in the four institutions, with 286 residing at the Geriatric Hospital.

He commended the management and staff of those institutions for the “stellar services” they provide, saying they were the “unsung heroes” of the healthcare services.

“Despite the less than desirable physical conditions under which they are required to work daily, all of our clients receive excellent healthcare. This is attested first by the numbers of requests received daily for admission to the hospitals, and secondly by the fact that the patients, many of whom are frail and dependent on total care, are able to thrive and comfortably live out their later years,” he stated.

Lt. Col. Bostic also applauded the Association of the Friends of the Geriatric Hospital for the appeal initiative, which is soliciting contributions for the continuation of the rehabilitation works there.