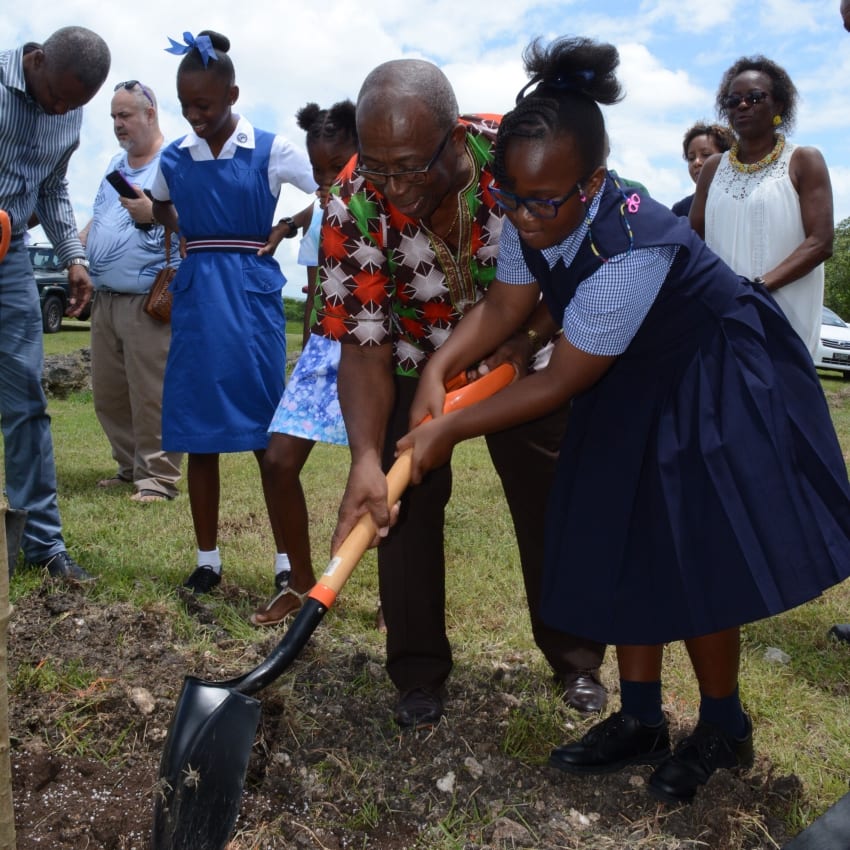 Minister of the Environment and National Beautification, Trevor Prescod and Half Moon Fort Primary student, Phoebe Broomes, plant a tree at the Arbor Day Celebrations at the National Botanical Gardens on Saturday. (A. Chandler/BGIS)

The importance of trees and their impact on the environment is even more significant today than it was 100 years ago when Arbor Day was initially celebrated.

Minister of Environment and National Beautification, Trevor Prescod, made this assertion as he delivered opening remarks on Saturday at the National Conservation Commission’s (NCC) Arbor Day Celebrations at the National Botanical Gardens, at Codrington, St. Michael.

“Trees help to absorb and reflect solar radiation by reducing temperatures and also is a major contributor in the provision of food, materials for the building of houses and other utility purposes,” Mr. Prescod said.

He continued: “The preservation of trees and the reforestation is significant to the mitigation of the challenges of climate change … and we want Barbadians to appreciate the significance of today and its contribution to our future development.”

The Minister encouraged residents, especially home owners and schools, to plant at least two or more trees to help the island and by extension the NCC with its reforestation efforts.

He commended the NCC for taking an active role in increasing the propagation of trees, ornamental plants and shrubs in its plant nursery and, by extension, the efforts it has made in providing plants to for parks, beaches, open areas and the general public for purchase.

During his welcome remarks, the NCC’s General Manager, Keith Neblett, also encouraged residents to plant trees. However, he cautioned persons to pay attention to where they planted the various tree species, and to ensure that their root structures did not cause damage to properties.

As part of the day’s celebrations, several trees were planted at the National Botanical Gardens and students in the Primary School Tree Investigation Competition was presented with their prizes.

Accepting their prizes were first place winner in the seven to nine age category, Phoebe Broomes, from the Half Moon Forte Primary. In the age 10 category, past students of the Lawrence T. Gay Memorial School, Janaya Mascoll and Jada Worrell, were the second and third place winners respectively.

A presentation was also made to Jeff St. Aubyn Chandler, a Senior Laboratory Technician (Horticulture) at the University of the West Indies Cave Hill Campus, for his continuous contribution to Arbor Day celebrations in Barbados since 1995.

Barbados re-established National Arbor Day celebrations in 1997 and is one of 33 countries around the world which mark the special day.