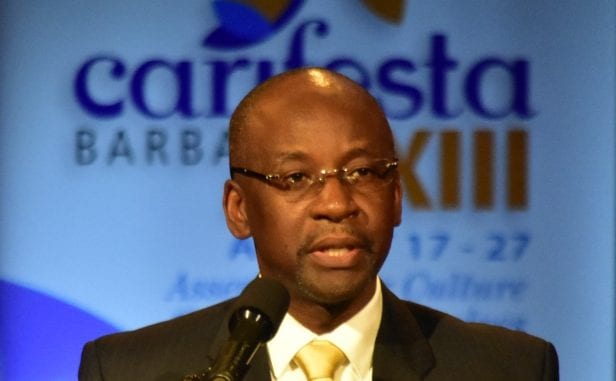 As preparations for CARIFESTA XIII enter the final phase, interest from the Barbadian population continues to show great promise.

This disclosure was made by Minister of Culture, Sports and Youth, Stephen Lashley, who recently updated the media on the preparations for the arts festival during a press briefing in his Ministry’s conference room in Sky Mall.

Mr. Lashley noted that Barbadians were showing a “very high level of interest in CARIFESTA”, particularly in attending the festival’s opening ceremony which will take place on Friday, August 18, at the Kensington Oval, at 6:00 p.m.

To date, over 9,000 free tickets have been distributed to members of the public, and Mr. Lashley expressed the hope that this interest would continue throughout the 10-day festival.

With 26 countries registered and over 2,000 artistes coming to Barbados to celebrate and showcase Caribbean art and culture, the Minister stated that it was expected that the festival would cater to the various interests of the Barbadian population. He explained that in an effort to include more communities in the festivities, the festival’s programme was decentralised, with events across the island.

Mr. Lashley indicated to the media that the locations earmarked to hold CARIFESTA XIII-related events around the island were either completed, or in the final stages of completion. Among them are the Wildey Gymnasium, Combermere School, Lester Vaughan School, Christ Church Foundation and the Daphne Joseph Hackett Theatre.

Additionally, to further engage Barbadians during the festival, the Minister noted that the Host Broadcaster, the Caribbean Broadcasting Corporation, would televise CARIFESTA XIII events on Channel 107 on MCTV.