Barbadians Told: Now Is The Time To Give Back 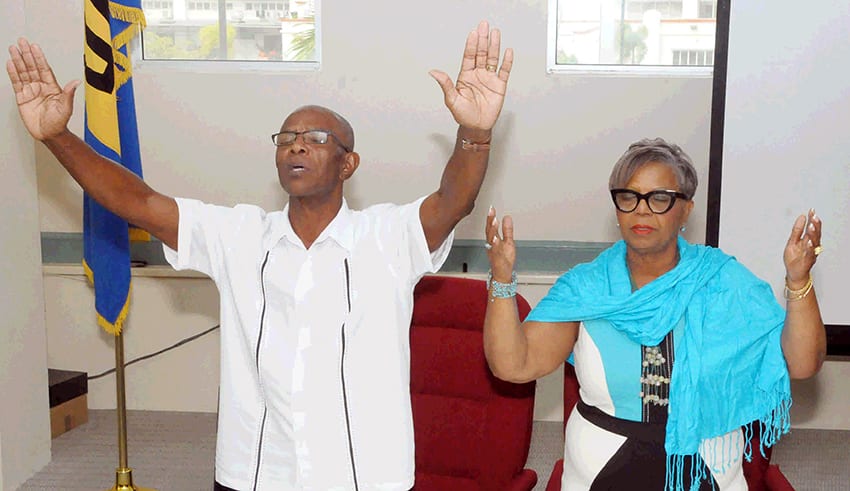 Minister of People Empowerment and Elder Affairs, Cynthia Forde, today appealed to Barbadians, and particularly those who rose from humble beginnings, to go back into the communities where they grew up and give back.

Speaking at a prayer session at Warrens Office Complex organized to observe the Pause for a Cause initiative, Minister Forde said that the time was now to return to these communities and mentor the young people.

She lamented: “Nowadays, people feel they have arrived and don’t want to be associated with the villages from which they came, but I appeal to you not to turn your backs.  Ours must be a collective response.  We have to work together to stymie this decline.”

The Ministry of People Empowerment and Elder Affairs spearheaded the initiative, which saw people around Barbados, including those in workplaces, churches and schools, pause for one minute at midday in prayerful silence. The Weekend of Prayer and Reflection is being observed from today, February 1, to Sunday, February 3, in response to the spike in violent crimes experienced last month.

Revealing that she personally knew three of the young men who lost their lives, Minister Forde appealed to those involved in criminal activity to “lay down the arms and pick up the Word of God”.

The Minister of People Empowerment said that as she has seen the population come together to support the Pause for a Cause initiative, it has reaffirmed in her mind that there are wonderful people in Barbados.

“This togetherness says we are ready to move to the next level to pull Barbados back.  I pray we will never give up the moral and spiritual gifts handed down by our fore-parents who were steeped in Christian faith. 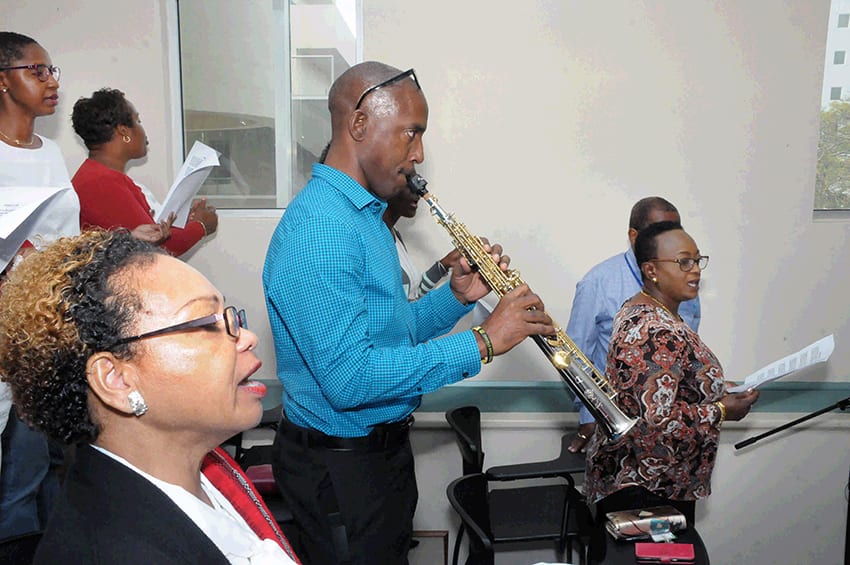 Staff members at the Ministry of People Empowerment and Elder Affairs praising God in song at today’s Pause for a Cause prayer session at Warrens Office Complex. (B.Hinds/BGIS)

“We must rid our society of this mentality among the youth of ‘get rich or die trying’.  I’m begging you: do not give up the fight. All is not lost,” she said.

The session, which was attended by staff of the Ministry as well as other Government workers who share the office space, was also addressed by Pastor Patrick Drakes of the Barbados Evangelical Association.

Pastor Drakes submitted that in these days of violence, the nation must be reminded that peace was a worthwhile commodity. “Our churches, workplaces and homes must all be at peace,” he said.

He implored parents especially to make sure that their homes were peaceful zones, stating: “We must stop blaming the Government of the day, our schools, our institutions, our neighbours and our children’s friends.  Our homes need to be places where peace is evident and where our children can be taught and where the family can be the personification of peace.”

The pastor noted that in order to salvage Barbados, prayer was paramount, since nothing could take the place of commitment to God, and constantly seeking his direction for this country.