Barbadians Urged To Confront Any Obstacles 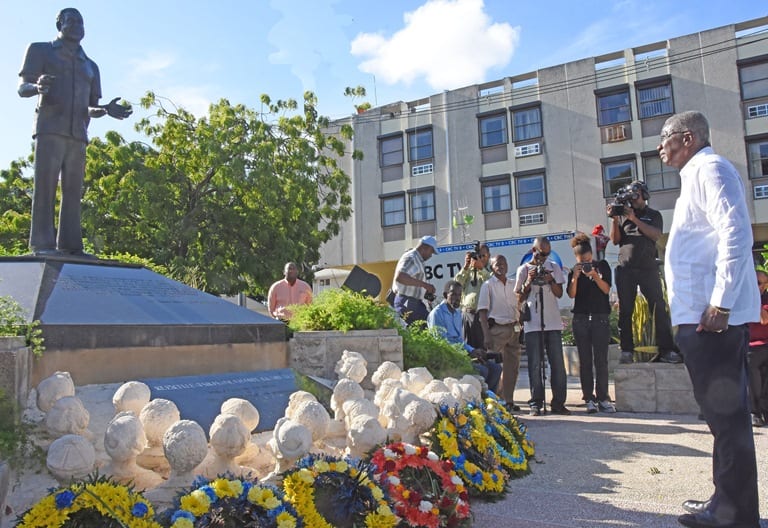 Prime Minister Freundel Stuart has urged Barbadians to continue to be prepared to confront those obstacles which will appear in their path from time to time.

Mr. Stuart reminded his audience today at the Labour Marches On! – A Tribute to the Icons of the Labour Movement that on our path towards nationhood 50 years ago, there were doubts that Barbadians could endure emerging challenges using their own strength.

“Breaking the chains, the hoops and constraints of dependence requires the fortitude and collective action captured in the thought: ‘Together we aspire, together we achieve’,” he contended.

The Prime Minister stressed that he was looking to the future with confidence, courage and optimism. “Barbados as a nation has been fashioned by Christian values, reinforced and strengthened by political parties, by the private sector and trade unions, and fortified by a competitive and entrepreneurial spirit which ensures that as a people we determine to leave the world a better place than we found it.

“I see the pride and industry in our sports persons and in our sports icons, in our students at all the levels of our well-structured educational system, in the surging performances of our young women, and in the creative genius of our cultural practitioners,” he stated.

Mr. Stuart added that Barbados had produced scholars of the highest calibre, as well as public servants, trade unionists and business persons who were “world class”.

He told the gathering that Barbados continues to be grateful for the work of its labour heroes. According to him, their efforts had contributed to earning the country respect not only in the developing world, but also in the world beyond.

“They both, by precept and by example, taught us how to see reality as a powerful tool in dealing with the challenges which can confront a small island, risk prone, vulnerable developing state,” he indicated.

The Prime Minister expressed the view that through them, Barbadians had learnt the art of collective engagement, which reached its highest expression in the Social Partnership. He added that the Social Partnership was accepted by all elements in Barbados and lauded in the community of nations.

The Heritage Labour March, which started at the Frank Walcott Statue with speeches and a wreath laying ceremony, also commemorated the 100th anniversary of the birth of National Hero, the Right Excellent Sir Frank Walcott.

During the march, the walkers made several stops, including at Culloden Farm, John Beckles Drive, Charles Duncan O’Neal Bridge, and National Heroes Square. It culminated in Queen’s Park, where there was a rally, as well as dramatisations of speeches by the Right Excellent Errol Barrow and the Right Excellent Sir Frank Walcott.