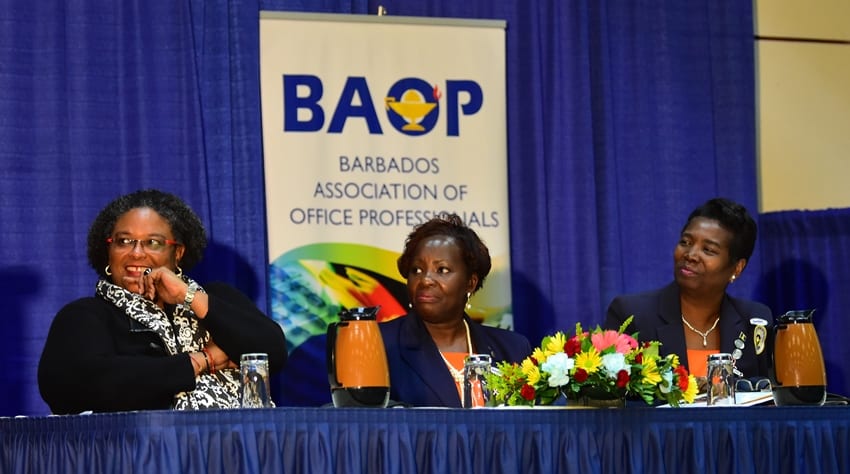 Prime Minister Mia Amor Mottley has called on all Barbadians to embrace the country’s youth and help them to chart a positive course.

Ms. Mottley made the call today as she delivered the feature address at the opening of the Barbados Association of Office Professionals’ (BAOP) 22nd Annual Conference, at the Lloyd Erskine Sandiford Centre.

The Prime Minister said young people needed the support and guidance of adults and each member of society had a duty to assist in raising these children. She continued: “If we have children who are just ambling along without guidance, they will go anywhere and we need to be able to speak firmly to them….

“Our country has not gone too far…. The group of persons who are badly in need of our guidance, support, love and discipline are those between the ages of 15 and 21 or 22. Many of whom look like strong, strapping adults but who we know are still full of doubt and…wondering how to move from this step to the next step.” She added that although they might not show it, they were usually thankful for the support given.

Ms. Mottley pointed out that persons also needed to show empathy and care, providing assistance if they could, or directing those in need to the appropriate individuals who could help.

She stated that many years ago, Government might have only looked at the “harsh and difficult” things of life, but it must now look at getting the “soft” things right, such as social and emotional learning and retraining, for its citizens.  She said that in this very turbulent world where change was the only constant, it was imperative that persons ground themselves and be ready for whatever it presented.

“The world in which we live has changed and we will either change with it or we will be left by it. I have asked our country to embrace that change and to embrace it in the context of the fact that we need to retrain ourselves and we need to empower ourselves,” she explained.

The Prime Minister noted that the country has had to deal with a number of changes, including in the economy and the international financial services sector. She pointed out that corporation taxes, for example, would become less relevant to a Government’s capacity to survive because of the fluidity and mobility of global companies.

“What we will see more is a move towards objects and services that are capable of being taxed at point of delivery or point of sale. So Barbados is on the cutting edge of where we intend to go again,” she stated.

Ms. Mottley told the BAOP members that their profession was at the centre of change because of technology. “As you reposition yourself in this moment of change, the ultimate ambitions are always to have the attitudinal disposition that allows you to manage change and work with people,” she stressed.