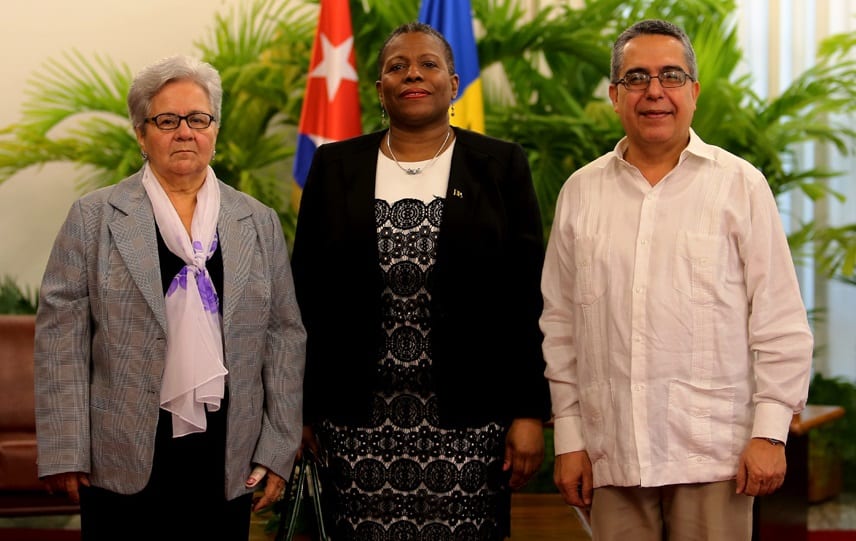 Barbados’ Ambassador to the Republic of Cuba, Donna Forde (centre) posing for a photograph with Vice President and Member of the State Council, Gladys Bejerano Portela and First Vice Minister of Foreign Affairs of Cuba, Marcelino Medina Gonzalez. (GP)

Barbados’ Ambassador to the Republic of Cuba, Donna Forde, presented her credentials on Thursday, January 25, to Cuba’s Vice President of the Council of State, Gladys Bejerano Portela,

Vice President Bejerano Portela expressed Cuba’s appreciation for the positive and fruitful relations which the two countries have enjoyed since establishing diplomatic relations in December 1972.

The Vice President commended the Barbados Government on its nomination of Ambassador Forde, and expressed optimism about this new chapter in the ongoing engagement between the two countries.

She also  conveyed Prime Minister Stuart’s appreciation for the opportunity which the 5th Cuba-CARICOM Summit, held last December in St. John’s, Antigua, presented for him to engage with President Raúl Castro.

Ambassador Forde discussed her long stewardship with Cuba, which started when she served as Desk Officer in her early days in the Ministry of Foreign Affairs. She expressed appreciation for the honour of being Barbados’ first resident diplomat to that country and her first Ambassadorial appointment there.

Vice President Bejerano Portela and Ambassador Forde also spoke of the effective collaboration of the two countries in the multilateral fora and the potential for continued efforts within the framework of the Community of Latin American and Caribbean States (CELAC).

The Ambassador praised Cuba’s recently announced programme for Climate Resilience “Tarea Vida”, a 100-year programme to protect that country from climate change. She noted its potential to serve as a model for Barbados and other Caribbean countries, who, like Cuba, were vulnerable to natural disasters.

Ms. Forde was responsible for establishing Barbados’ Embassy at Havana, and served as Chargé d’Affaires there for the past seven years. Prior to her posting in Cuba, she served at the Embassy of Barbados to the United States and the Permanent Mission to the Organization of American States at Washington DC, and to Barbados’ Permanent Mission to the United Nations at New York.

The Ambassador has a Bachelors Degree in French and Spanish from the University of the West Indies (Cave Hill) Campus. She completed post-graduate studies at Institut d’Études Politiques, Paris, France, and American University, Washington DC, USA.