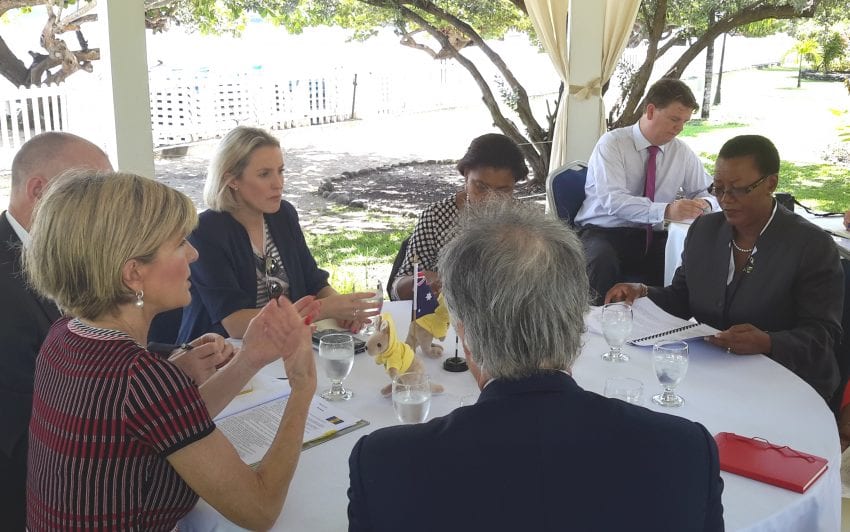 Barbados and Australia have pledged to work more closely in the areas of climate change and trade and investment.

Senator McClean suggested possible areas of collaboration which could be pursued between the two countries, particularly environmental research, since Barbados was working actively on a number of environmental projects. These included, she noted, ways of protecting the island’s coral reefs, and how to eliminate the influx of Sargassum seaweed.

In the area of International Business, the Foreign Minister explained that Barbados was forging ahead with this sector as it was important to the economy, and was also interested in collaborating in the areas of trade and investment with Australia.

Concerning the financial services sector and de-risking, Senator McClean pointed out that with the recent changes in the financial rules in the international arena, there were some areas of concern.

“We have to ensure the systems we have in place are effective and that we find mechanisms that allow us to do business and put structures in place that don’t do damage to our economies,” she insisted.

In turn, Ms. Bishop welcomed further cooperation between the two nations, adding that her country was committed to the Paris Agreement on Climate Change.

She said that Australia understood the concerns of Small Island Developing States (SIDS), adding that it saw itself as a champion for SIDS and was committed to providing assistance where possible.

The Australian Foreign Minister pointed out that as co-chair of the Commonwealth Climate Access Fund, her country was in a position to provide assistance to Caribbean countries and to share experiences and adaptation programmes. She mentioned that it had already provided funding to Grenada and St. Kitts and Nevis.

Ms. Bishop was accompanied by Australia’s High Commissioner to the Organisation of Eastern Caribbean States, John Philbeam; Chief of Staff of the Ministry of Foreign Affairs, Murray Hansen; and Senior Adviser, Georgie Skipper.