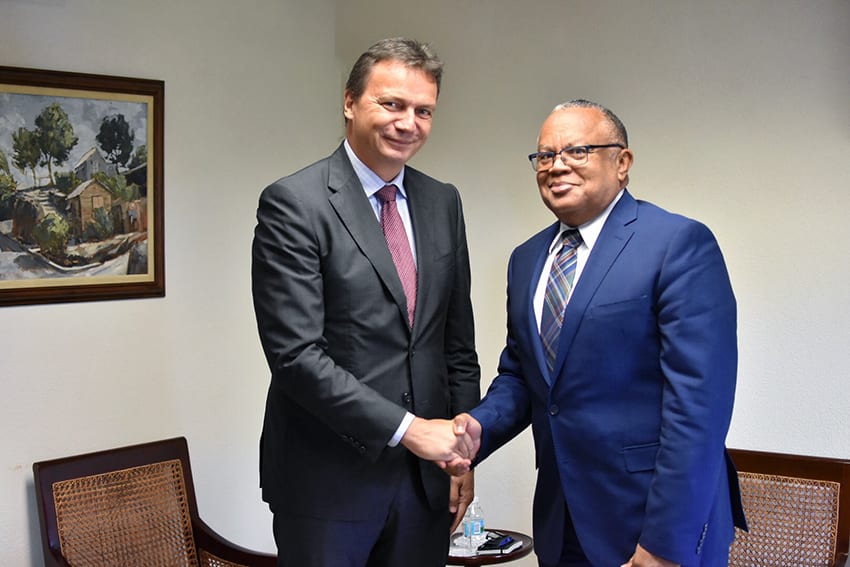 There is potential for Barbados and Switzerland to deepen their bilateral relations.

Minister of Foreign Affairs and Foreign Trade, Senator Dr. Jerome Walcott, identified tourism and health as areas for possible cooperation, during a recent courtesy call by Ambassador of Switzerland to Barbados, Didier Chassot.

He added that the island had benefitted from Swiss scholarships in agriculture, medicine, pharmacy and diplomacy, and shared that approximately 5000 tourists visited Barbados last year.

“Swiss people do travel, so there is a possibility for us to attract more.  We hope to broaden and make ourselves more popular in Switzerland,” he said.

Dr. Walcott also suggested that there should be some collaboration in orthopaedic techniques, since the Swiss are renowned in this area.  “It would be beneficial to expose local surgeons to such techniques,” he said.

Ambassador Chassot remarked that he was impressed with Barbados’ “new impetus to CARICOM affairs”.  He said his country has placed disaster risk reduction and assistance as a priority.

The envoy also noted that the areas of disaster risk reduction, management and resilience would be a strong priority for his country and he believed this was a “good fit” for cooperation with CARICOM.